Our story begins in 1882 when founders Jacob Justen and his brother moved to Main Street which was then called West McHenry. They opened one of the first undertaking establishments in McHenry County, Justen Brothers Furniture and Undertaking. When the partnership dissolved 12 years later, Jacob relocated to the corner of Green and Elm streets and opened a small furniture store with his casket selection room on the second floor and the embalming room in the basement. He frequently did the embalming in the home of the deceased. The early horse-drawn funeral coach came from the Chicago area, and the delivery drivers were workers from the monument store in town.

While Jacob attended to funeral service, his oldest son, George, was in charge of removing the funeral equipment and moving the family’s furniture back into place. Jacob’s two sons, George and Albert, joined the Jacob Justen and Sons Furniture and Funeral Business in the early 1900s. Jacob’s formal education in the business came from the Clark School of Embalming in 1892, and the Chicago College of Embalming in 1899. In 1915, George attended Worsham College, and Albert followed in the 1920s.

In its previous location on Elm Street, the George R. Justen & Son Funeral Home evolved from Jacob’s residence next to the furniture store, where extensive remodeling was done following Jacob’s death in 1940. George’s son, Robert A. Justen, graduated from Worsham College of Mortuary Science and joined George and Albert’s business in December 1947. George purchased Albert’s interest in 1948 and changed the name to George R. Justen and Son Funeral Home. George made the most of the day-to-day struggles and saw his business flourish.

George left his mark on the McHenry area with easy credit methods for anyone who needed his services. With a big heart and a great love for the community, he is remembered with affection by the residents of McHenry. In 1956, ground was broken for additional space which included a new chapel, casket selection room, smoking room, and general storage space. George died in 1960, at which time Robert A. Justen was left with the furniture store and the funeral home. Robert quickly made many changes. He sold the ambulance service to the private sector and the furniture store to his brother, Dennis Justen. The furniture store, a landmark in the community, was destroyed by fire in April of 1969 and never reopened. 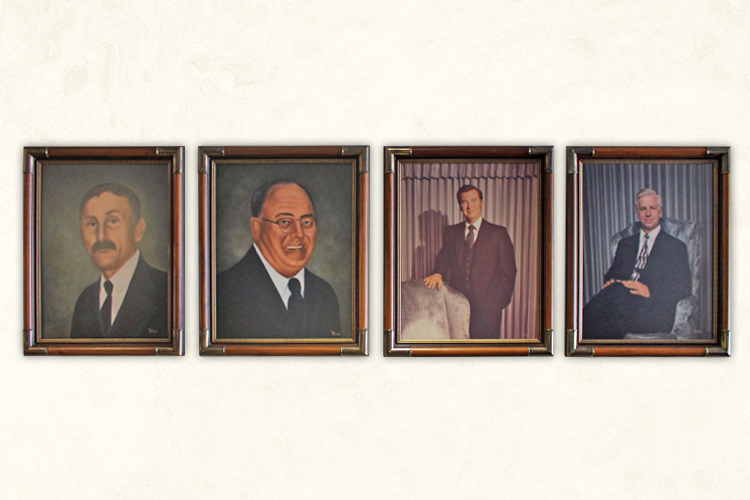 In 1975, Mark L. Justen and Krista Justen, Robert’s children, joined the funeral home. Both received their mortuary science education at Worsham College in 1975 and 1976, respectively, making the fourth generation to serve the community. In 1978, the family suffered a tragic loss with the sudden death of Robert’s wife, Collette. Shortly after her mother’s death, Krista decided to leave the funeral industry while Robert left the operations and management to Mark.

When Mark took the helm of the business, he followed his family’s tradition of the next generation working to enhance what had gone before while moving in an exciting new direction. In 1983, he gained approval for installation of the first crematory in McHenry County. In January of 1985, he purchased the Wonder Lake Funeral Home which had been established by John Freund in 1972. Justen’s Wonder Lake Funeral Home is on Hancock Drive on the east side of Wonder Lake.

Mark and Nancy married in 1986, and had two sons. The fifth generation is made up of Rob, a graduate of the University of Arkansas at Fayetteville, and Alex, a graduate of Tulane University in New Orleans, LA. Nancy is a licensed funeral director and certified preplanning consultant in the State of Illinois and Wisconsin. She is also a certified crematory operator.

In 1989, Mark and Nancy purchased the Round Lake Funeral Home from the MacGillis family. Located on Cedar Lake Road and North Rosedale Court in Round Lake, the funeral home has been extensively remodeled to provide a comfortable, soothing environment for families.

In May of 2017, after graduation from American Academy McAllister Institute of Funeral Service, Rob joined Mark in the family business. Tragically, Mark passed away unexpectedly from cardiac issues in March 2020, and the business continues on with Rob’s leadership as Owner and Licensed Funeral Director.

Justen Funeral Homes & Crematory is the oldest business in McHenry, Illinois still operated by members of the original family. Today, we proudly serve our community at 3700 W. Charles J. Miller Road in McHenry.