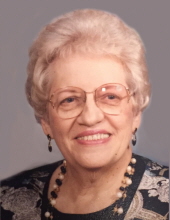 Aleigra J. Revak, age 93, of Ashland City, Tennessee and formerly of McHenry, passed away peacefully on January 19, 2018, at her home in the company of her loving family.

Born October 4, 1924 in Milwaukee, Wisconsin, Aleigra was one of two daughters born to Lester Bliffert of Milwaukee and Alyce (Schmidt) Bliffert, of Portland, Oregon and originally Ladysmith, WI. On July 24, 1948, Aleigra married the love of her life, Leo Revak at the Christian Church in Ladysmith, WI. Aleigra was a resident of McHenry since 1953. After the death of Leo in 1993, she moved in with her daughter and family, and relocated with them to Tennessee in 2013 after living in McHenry for 60 years.

Aleigra was a registered nurse, and began a long career at the former McHenry Hospital on Waukegan Road in McHenry. For most of her career, she was Purchasing Manager for the hospital, where she was well known as Mrs. A. Revak. If asked, she would say she went by her first initial because her first name was too difficult. Using her medical knowledge along with a talent to efficiently manage a very busy department, she was responsible for processing and receiving most orders for the facility. As the hospital grew, so did the activity in her department, especially after the hospital relocated to the present Centegra Hospital-McHenry campus. In 1994, Mrs. A. Revak officially retired from the former Northern Illinois Medical Center in McHenry.

Aleigra was a devoted Christian and long-time member of the First Baptist Church in McHenry, with her church and her church friends being very dear to her. She enjoyed getting together with friends, especially for bowling or bingo. During her lifetime, the love of her family was what she cherished the most. A caring wife and loving mother, Aleigra especially enjoyed experiencing her family grow. She was an adoring grandmother and, more recently, a doting great-grandmother to two great-granddaughters.

She was preceded in death by her parents and her husband, Leo J. Revak, on January 2, 1993.

Visitation will be from 11 a.m. to noon on Saturday, January 27, 2018, at First Baptist Church, 509 N. Front Street, in McHenry. The funeral service will be at noon Saturday at the church. A private burial for the family will follow in Woodland Cemetery, McHenry.

Her family suggests memorials in her memory be made to the Glaucoma Foundation at www.glaucomafoundation.org or to Helping Paws, 2500 Harding Lane, Woodstock, IL 60098.

To leave a condolence, you can first sign into Facebook or fill out the below form with your name and email. [fbl_login_button redirect="https://justenfh.com/obituary/aleigra-j-revak/?modal=light-candle" hide_if_logged="" size="medium" type="login_with" show_face="true"]
×