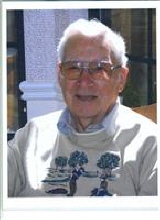 Andrew J. Knackstedt, age 92, of Johnsburg, died Sunday, January 15, 2012 at his home in Johnsburg.
He was born July 13, 1919 in Cleveland, Ohio to Andrew and Georgianna (La Beau) Knackstedt. Raised and educated in Chicago. While in High School, Andy joined the Civil Conservation Corp. (CCC) to help support the family after his father died. He married Melvina Wright on September 20, 1941.
A veteran of the U.S. Navy, he served during both World War II and the Korean War. During WWII he served on the USS South Dakota. During the Korean War he served on the USS Philippine Seas.
A resident of the Johnsburg area for over 50 years, he was employed as a tool and die maker for the majority of his career. He worked for Morton Chemical in Ringwood and Autolite in Woodstock. Prior to retiring at age 62, he was employed by Union Special in Huntley for 25 years.
Following his retirement, he and his wife enjoyed spending their winters in Arizona and Florida. Interests throughout his lifetime included bow & arrow hunting, fishing, golfing, and remodeling. Following the auction purchase of a former elementary school on English Prairie Road in Spring Grove, he undertook a total renovation of the school, transforming it into a home he and his wife would enjoy for 19 years.
Survivors include his wife of 70 years, Melvina; two children, Judith (John) Fleck of Pensacola, Florida and James (Patty) Knackstedt of Johnsburg; six grandchildren, Kaitlin Knackstedt, Danielle Knackstedt, James Knackstedt, Patricia (Thomas) Bowen, Janet (Mark) Taylor, Ellen (Brandon) Domingue; and six great-grandchildren, Elodie, Zoe, Tori, Hayden, Lindsey, and Tommy. Andy was the youngest of siblings and affectionately called “Babe”.
He was preceded in death by his grandson, David Fleck on November 9, 2008; his parents; and four brothers, Ray, Roy, Robert, and Walter.
Visitation will be from 9 a.m. until 10 a.m. on Monday, January 23, 2012 at St. John the Baptist Catholic Church, 2302 W. Church St., Johnsburg, IL 60051.
The funeral Mass will be celebrated at 10 a.m. on Monday, January 23, at St. John the Baptist Catholic Church.
Inurnment will be in St. John the Baptist Cemetery, Johnsburg.
For those wishing to send an expression of condolence, his family suggests memorials to St. John the Baptist Catholic Church for the Together in Hope Roof Fund.
Arrangements were entrusted to Justen Funeral Home & Crematory. For information, please call the funeral home at 815-385-2400. Friends may send on-line condolences to the family at www.justenfh.com.

To leave a condolence, you can first sign into Facebook or fill out the below form with your name and email. [fbl_login_button redirect="https://justenfh.com/obituary/andrew-j-knackstedt/?modal=light-candle" hide_if_logged="" size="medium" type="login_with" show_face="true"]
×