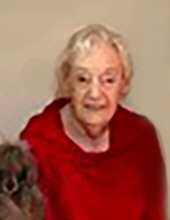 She was born October 14, 1939 to Richard C. and Lucile (Fisher) Knupper. Anita was raised and educated in Palatine. She was employed as a hairdresser and manicurist for a number of years before working for Knowles Electronics in Elgin for many years prior to retirement.

On June 10, 1977, Anita married William Hughey, and they lived and worked in the Elgin area. In June of 2000, they moved to Oxford, Arkansas, where they retired and Anita was active in an area quilting club. When Bill died suddenly on June 16, 2008, Anita relocated to the McHenry area, where she became active in many activities at the McHenry Senior Center. Anita enjoyed knitting lap robes, producing many in an array of colors.

Survivors include two sisters, Margaret (David) Thiessen of Woodstock and Barbara Knupper of New Mexico; a niece, Kathryn (David) Bond; and sisters-in-law and brothers-in-law of her late husband.

Visitation will be from 1 p.m. until 3 p.m. Monday, January 8, 2018, at Justen Funeral Home & Crematory, 3700 Charles J. Miller Road, McHenry, IL 60050. The funeral service will be at 3 p.m, in the funeral home. Burial will be held privately Tuesday at Bluff City Cemetery, Elgin.

For those wishing to send an expression of condolence, her family suggests memorials to the American Heart Association or to a charity of the donor’s choice.

To leave a condolence, you can first sign into Facebook or fill out the below form with your name and email. [fbl_login_button redirect="https://justenfh.com/obituary/anita-e-hughey/?modal=light-candle" hide_if_logged="" size="medium" type="login_with" show_face="true"]
×