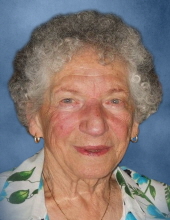 Anna Mae “Annie” Cuda, age 94, of McHenry, passed away on March 7, 2019 at Fox Point of McHenry. She was born to Frank and Anna (Polka) Vyskocil on June 13, 1924 in Chicago. She met a young man from her neighborhood, Charles “Chuck” Cuda, and they married on August 10, 1947 at Blessed Sacrament Rectory in Chicago.

After relocating to McHenry, Annie held the position of Bookkeeper for Althoff’s Plumbing and Heating in the 1960s and Northern Propane Gas Company from 1965 to 1980. Annie was also a realtor for Century 21 Care Real Estate for over twenty years.

Annie was among the founding members of the McHenry Hospital Auxiliary and held many additional memberships during her lifetime, including the City of McHenry Zoning Board of Appeals, McHenry Grade School District 15 Board of Education from 1969 to 1977, and the McHenry Choral Club, where she lent her vocal talents as a soprano.

Led by her deep faith, Annie was a devoted Catholic and member of St. Patrick Catholic Church since 1951. She served on the Parish Council, choir, and lector as well as holding membership for the McHenry County Council of Catholic Women St. Patrick Parish. She was among the founding members of Bridge for Books, a local bridge club that raised money for Montini Catholic Schools. For over 30 years, she enjoyed spending time at their lake house on Lake Noquebay in Crivitz, WI.

In addition to her parents, Annie was preceded in death by the love of her life, Charles Cuda, on January 27, 2017; her older sisters, Dorothy Collins and Rosemary Vyskocil; and her twin sister, Mary Marcella Knox.

For more information, please call the funeral home at 815-385-2400 or visit www.justenfh.com, where friends and loved ones may leave a message on Annie’s Tribute Wall.

To leave a condolence, you can first sign into Facebook or fill out the below form with your name and email. [fbl_login_button redirect="https://justenfh.com/obituary/anna-mae-annie-cuda/?modal=light-candle" hide_if_logged="" size="medium" type="login_with" show_face="true"]
×