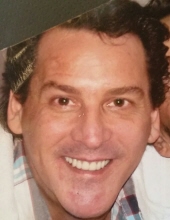 Anthony Lee Simon, age 51, of Wonder Lake, died Monday, December 18, 2017, at his residence. He was born January 20, 1966 in Chicago, to Donald J. And Elizabeth A. (Delorenzo) Simon. Anthony worked as a printer for over 20 years. A valued employee of McHenry Printing, Brown Printing of Woodstock, and Carlith LLC of Carpentersville. Anthony was an avid fisherman and enjoyed boating with his family. Anthony is survived by four children, Jeff, Kyle, Gina, Joseph; his mother, Elizabeth; two brothers, Lawrence (Michelle) Wolf, Jason Simon; and seven nieces and nephews, Megan, Anthony, Kevin, Christina, Nico, John Ryan, and Donald. Anthony was preceded in death by his father, Donald; his brother, Christopher Delorenzo; and his nephew, Bryan Wolf. Visitation will be from 4:00 p.m. until 8:00 p.m. Thursday, December 21, 2017 at Justen Wonder Lake Funeral Home, 7611 Hancock Drive, Wonder Lake, IL 60097. Visitation will resume at 8:30 a.m. on Friday, December 22, at The Church of Holy Apostles, 5211 W. Bull Valley Road, McHenry, IL 60050. The funeral Mass will be at 9:30 a.m. Interment will be in St. Mary’s Catholic Cemetery, McHenry. For information, please call the funeral home at 815-385-2400

To leave a condolence, you can first sign into Facebook or fill out the below form with your name and email. [fbl_login_button redirect="https://justenfh.com/obituary/anthony-lee-simon/?modal=light-candle" hide_if_logged="" size="medium" type="login_with" show_face="true"]
×