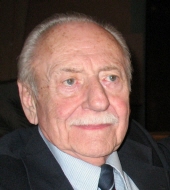 Arthur proudly served in the U.S. Army stateside during the Korean War. Arthur enjoyed working with his hands, he was an excellent carpenter. He was a valued employee with Pepper Construction, as the General Superintendent that was in charge of building the new Centegra Hospital in McHenry.

In addition to his parents, Arthur was preceded in death by his wife Marian, his son Randall, his brother, Lawrence, and his sister, Irene.

In lieu of flowers, his family suggests memorials to the JourneyCare Foundation, 2050 Claire Court, Glenview, IL 60025.

Arrangements were entrusted to Justen Funeral Home And Crematory. For information, please call the funeral home at 815-385-2400, or visit www.justenfh.com, where friends may leave an on-line condolence message for Arthur’s family.

To leave a condolence, you can first sign into Facebook or fill out the below form with your name and email. [fbl_login_button redirect="https://justenfh.com/obituary/arthur-p-raabe-jr/?modal=light-candle" hide_if_logged="" size="medium" type="login_with" show_face="true"]
×