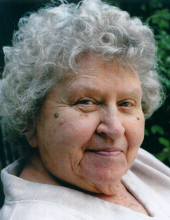 Barbara Leight, age 93, of McHenry, passed away on February 26, 2020, at Northwestern Medicine Huntley Hospital, surrounded by loved ones.  She was born on February 27, 1926, in Chicago to Frank and Bessie (Lapinski) Neja.  Barbara was united in marriage to Alfred Leight on June 3, 1944.

Barbara was raised in Chicago and graduated from Lakeview High School.  She continued to live in Chicago with Alfred until moving to McHenry when their children were young.

Barbara enjoyed being a stay at home mom until her kids were older, then she worked at McHenry High School as a manager in the cafeteria for several years.  Later, they built a house and moved to Arizona.  When Alfred become ill and passed away in 1985, Barbara remained in Arizona until 2008 working in retail sales and as an office manager.  She moved to Fox Lake Senior Apartments and then Valley Hi Nursing Home in 2012.In her leisure time,

Barbara enjoyed golfing, reading, painting, and playing bridge.  She loved babysitting her grandchildren when they were growing up and was always thoughtful about birthdays and graduations.

For more information, please call the funeral home at 815-385-2400, or visit www.justenfh.com, where friends and loved ones may share memories of Barbara on her tribute wall.

To leave a condolence, you can first sign into Facebook or fill out the below form with your name and email. [fbl_login_button redirect="https://justenfh.com/obituary/barbara-leight/?modal=light-candle" hide_if_logged="" size="medium" type="login_with" show_face="true"]
×