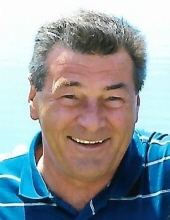 Benjamin M. Raymond, age 68, of McHenry, passed away Wednesday, January 3, 2018, at JourneyCare in Barrington. He was born September 1, 1949 in Columbus, Ohio to Leonard O. and Sara Jo (Winters) Raymond. Raised in Columbus, he was a 1967 graduate of Marion Franklin High School in Columbus, and married Suzanne Gail Neuman in 1973.

A veteran of the U.S. Army from 1969-1971, he served stateside as a medic during the Vietnam War. After his discharge, he continued his education at Ohio University, where he received his B.S. degree in 1974, and later received his Master of Arts degree in secondary education from Concordia University. For many years, Ben was a sales associate with Whitehall Pharmaceuticals. After entering the field of education, Ben taught Special Education at Dundee-Crown High School – Community Unit School District 300 for 18 years until retiring from full-time duties in 2009. He returned to District 300 as a substitute teacher from August 2009 to October 2016.

An avid fan of the Ohio Buckeyes, Ben’s other leisure time activities included golfing and gardening. Most of all, he loved being a grandfather and enjoyed time he was able to spend with his family.

In addition to his parents, he was preceded in death by his wife, Suzanne, on February 12, 1999.

A memorial visitation will be held from 3 p.m. to 8 p.m. Monday, January 8, 2018, at Justen Funeral Home & Crematory, 3700 Charles J. Miller Road, McHenry, IL 60050. The visitation will resume Tuesday from 10 a.m. until the 11 a.m. service at the funeral home. Inurnment will follow in Woodland Cemetery.

For information, please call the funeral home at 815-385-2400, or visit www.justenfh.com, where friends & acquaintances may leave an on-line condolence message for his family.

To leave a condolence, you can first sign into Facebook or fill out the below form with your name and email. [fbl_login_button redirect="https://justenfh.com/obituary/benjamin-mike-raymond/?modal=light-candle" hide_if_logged="" size="medium" type="login_with" show_face="true"]
×