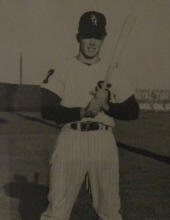 Carl graduated from Crown Point High School in Indiana in 1958, and received a full scholarship for playing baseball to Northwestern University in Evanston. As a sophomore he was named First Team All Big Ten. In 1960, Carl signed a professional baseball contract with the Chicago White Sox and enjoyed 7 years in the minor league, eventually making it to AAA, playing the position of right field, first base, and pitcher.

Carl was a valued manager at Storey’s Men Wear in Waukegan, Lakehurst, and Vernon Hills. He was also in sales for Atlas Movers, North Shore Movers, and National movers. Carl was a loving dad, doting grandfather, great brother, who will be missed by many.

In addition to his parents, Carl was preceded in death by his wife, Barbara.

The cremation rite was accorded privately. Services were private for Carl’s family.

For those wishing to send an expression of sympathy, his family suggests memorials in Carl’s name to Make A Wish Foundation, P.O.Box 29119, Phoenix, AZ 85038.

To leave a condolence, you can first sign into Facebook or fill out the below form with your name and email. [fbl_login_button redirect="https://justenfh.com/obituary/carl-d-lundgren/?modal=light-candle" hide_if_logged="" size="medium" type="login_with" show_face="true"]
×