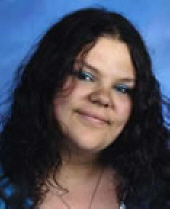 Cassandra A. “Cassie” Dimopoulos, 17, of Wonder Lake, died Monday, January 9, 2006, at her home.
She was born June 26, 1988 in McHenry to Odess and Kim (Olsen) Dimopoulos.
A lifelong resident of the McHenry and Wonder Lake areas, Cassie was a senior at McHenry High School, West Campus.
She loved to sing, and participated in the McHenry Idol contest, placing in the top ten. Writing was another favorite activity, and she especially enjoyed writing poetry. She was recognized with an award by the International Library of Poetry in January of 2006 for a poem she submitted. Her poetry was also published in the Northwest Herald Poetry Corner several times. Other enjoyments included dancing, cooking, reading, roller skating, and bowling.
She will be remembered for her beautiful smile, wonderful sense of humor, and quick wit.
She is survived by her mother, Kim Olsen Dimopoulos “Karaoke Kim”of Wonder Lake and (Kim’s) fiancé Gary Bryan of Cary; her father, Ody (Cindi) Dimopoulos of McHenry; three brothers, Steven Kontomichalos of Johnsburg, Christos Kontomichalos Jr. of McHenry, and Gust Dimopoulos of McHenry; her maternal grandparents, Fran and Jerry Olsen of Bella Vista, Arkansas; her aunt, Rebecca Thompson of Crystal Lake; aunts and uncles, John and Norma Dimopoulos of McHenry, Erik and Patti Olsen of Wisconsin, Karolin and Bruce Otto of Spring Grove, and Ernie and Gayle Olsen of Tokyo, Japan.
She was preceded in death by her paternal grandparents, Angeline and Gust Dimopoulos; and an uncle, James Dimopoulos.
The visitation will be from 3 p.m. until 8 p.m. on Thursday, January 12, 2006, at the George R. Justen & Son Funeral Home, 3519 West Elm Street, McHenry. Visitation will resume at 9:15 a.m. on Friday at the funeral home, until leaving for church at 10:30 a.m.
The funeral service will be at 11 a.m. Friday, January 13, 2006, at St. John the Baptist Catholic Church, 2302 W. Church Street, Johnsburg. The Rev. Robert Balog will officiate.
Interment will be in Woodland Cemetery, McHenry.
Memorials would be appreciated by the family to the McHenry County Sheriff’s Department Narcotics Division or to the McHenry Area Youth Commission.
On-line condolences may be sent to the family at www.justenfh.com.
For information, please call the funeral home at 815-385-2400.

To leave a condolence, you can first sign into Facebook or fill out the below form with your name and email. [fbl_login_button redirect="https://justenfh.com/obituary/cassandra-a-cassie-dimopoulos/?modal=light-candle" hide_if_logged="" size="medium" type="login_with" show_face="true"]
×