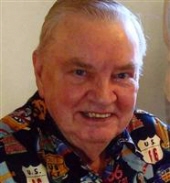 Charles V. Thacker, age 82, of McHenry, died Thursday, October 14, 2010 at his home.
He was born June 10, 1928 in Bedford, Indiana to Ernest H. and Elsie C. (Jacobson) Thacker. On February 5, 1951, he married Barbara L. McDonald at Unity Lutheran Church in Chicago.
He was a veteran of the U.S. Army during the Korean War.
Charles was raised and educated in Georgia, where he graduated from DeKalb County High School. After high school, he moved to Chicago, and then to McHenry in 1954. A stationary engineer for the majority of his career, he worked for Western Union in Chicago for 31 years, and then for Baxter in Round Lake for 12 years. Following retirement in 1990, he enjoyed the opportunity to travel throughout the country with his wife.
He was a lifetime member of V.F.W. Post 4600, and a member of Nativity Lutheran Church in Wonder Lake. He enjoyed being able to help friends and family fix things, and those who benefitted from his talents were most appreciative. Other enjoyments included watching and listening to talk news shows such as FOX news, 60 Minutes, and Bill O’Reilly; and he also enjoyed collecting coins.
He is survived by his wife of 59 years, Barbara; three children, Bruce (Gay Szara) Thacker of Woodstock, Roger (Kimberly) Thacker of McHenry, and Cheryl Kalsch of McHenry; six grandchildren, Jason, Jessica, Nicholas, Anna, Aaron, and Ashley; and a great grandchild, David.
He was preceded in death by his parents; a son-in-law, George Kalsch III; a sister in infancy, Marjorie Thacker; a brother, Norman (late Myrleen) Thacker; and a nephew, Newton.
Visitation will be from 2 p.m. until 5 p.m. Sunday, October 17, 2010, at Justen Funeral Home & Crematory, 3700 W. Charles J. Miller Road, McHenry, IL 60050.
The funeral service will be at 2 p.m. Monday, October 18, at the funeral home, with Rev. Rebecca Gordon officiating.  Friends may visit with the family from 1 p.m. until the time of service.
Interment will be in Woodland Cemetery, McHenry.
For those wishing to send an expression of condolence, his family suggests memorials to the Disabled American Veterans, P. O. Box 14301, Cincinnati, OH 45250-0301.
Friends may send an on-line condolence to the family at www.justenfh.com. For information, call the funeral home at 815-385-2400. 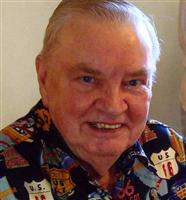 To leave a condolence, you can first sign into Facebook or fill out the below form with your name and email. [fbl_login_button redirect="https://justenfh.com/obituary/charles-v-thacker/?modal=light-candle" hide_if_logged="" size="medium" type="login_with" show_face="true"]
×