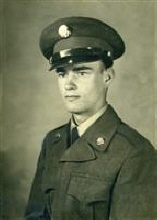 Cpl. Donald Victor MacLean, U. S. Army, Missing In Action in North Korea on December 2, 1950, will be laid to rest at a 1 p.m. graveside service, Saturday, August 31, 2013 at Windridge Memorial Park in Cary.
He was born February 20, 1933 in Elkhart, IN, to Alexander C. and Victoria MacLean. At the age of 17, he enlisted in the U.S. Army and was sent to Korea as a member of Company D, 1st Battalion, 32nd Infantry Regiment, 7th Infantry Division of the Korean War. First listed as Missing in Action Dec. 2, 1950 after fighting the enemy in North Korea, his status was later changed to presumed dead on December 31, 1953. Only recently were his remains positively identified.
He was posthumously awarded the Purple Heart, The Combat Infantryman’s Badge, the Korean Service Medal, the United Nations Service Medal, the National Defense Service Medal, the Korean Presidential Unit Citation, and the Republic of Korea War Service Medal.
He is survived by his twin sister, Donna V. Mitchell of McHenry, and several nieces and nephews.
He was preceded in death by his parents; his brothers, Earl, James, Peter, Frank, and Gerald MacLean, and by his sisters, June Viverito, Loretta Anderson, and Veronica Forstrom.
Arrangements were entrusted to Justen Funeral home & Crematory, McHenry. For information, please call the funeral home at 815-385-2400, or visit www.justenfh.com.

To leave a condolence, you can first sign into Facebook or fill out the below form with your name and email. [fbl_login_button redirect="https://justenfh.com/obituary/cpt-donald-victor-maclean/?modal=light-candle" hide_if_logged="" size="medium" type="login_with" show_face="true"]
×