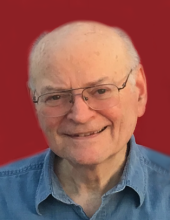 David met Maria Flores in Santa Monica, CA. They were married at St Mary’s Catholic Church in Hollywood on April 16, 1966 and then relocated to, and called Redondo Beach home, for many years. David worked most of his life in quality control for many government entities, such as Northrop Grumman and Electric Boat. He was very strong in his faith, and a devout member of St. Lawrence Martyr Catholic Church in Redondo Beach, CA. where he participated in the choir and served as a Lector and Eucharistic Minister. He was also a member of the Puso ng Carmelo (Heart of Carmel) community and a dedicated pro-life advocate. He had a love for flying and enjoyed taking his family on trips to Catalina Island and many other locations. He also enjoyed traveling to Europe with his sister, Jamie. In 2016, David and Maria relocated from California to Illinois, to be with their daughter and her family.

David is survived by his devoted wife of 53 years, Maria; two children, Greg, Gloria (Joe Watson); two grandchildren, Ryan, Cobi; sister, Jamie, and many loving nieces and nephews.
In addition to his parents, David is reunited in heaven with his three brothers, Gary, Lauren and Michael.

A vigil service will be held Thursday, June 27, 2019 at 6 p.m., with visitation to follow, at Mitchell Funeral Home, 233 East Main, Price, UT. The Funeral Mass will be Friday, 10 a.m., at Notre Dame de Lourdes Catholic Church, 210 N. Carbon Ave., Price, UT. In lieu of flowers, donations may be made to the Alzheimer’s Association (alz.org).

To leave a condolence, you can first sign into Facebook or fill out the below form with your name and email. [fbl_login_button redirect="https://justenfh.com/obituary/david-william-karnes/?modal=light-candle" hide_if_logged="" size="medium" type="login_with" show_face="true"]
×