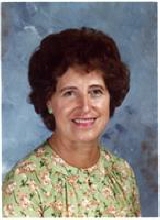 Dolores Helen Wines, age 84, died Wednesday, October 9, 2013 at Clare Oaks Retirement Community in Bartlett.
She was born November 18, 1928 in Chicago to John and Sophie (Trybula) Dyck. On September 10, 1949, she married Leo John Wines in Chicago.
Dolores had been a resident of Wonder Lake from 1955 until moving to Algonquin in 1990. In 2010, she became a resident of Clare Oaks Retirement Community in Bartlett.
Dolores graduated from St. Constance High School, attended Loyola University and De Paul University, and then earned her bachelor of science degree from Northern Illinois University. She taught science, math, and religion for 30 years, first teaching at St. Mary’s in Woodstock and then at Montini Catholic Grade School in McHenry. In 1974 she was selected as an Outstanding Elementary Teacher of America. She was selected for this honor on the basis of her professional and civic achievements. After retirement, she was a private tutor.
Dolores was very active in various food drives, and the Parent Teachers Association. She was a former member of Christ The King Church in Wonder Lake and a current member of St. Mary’s Church in Huntley.  Other memberships included the Society of Catholic Daughters and Parents Without Partners.
Survivors include four children, William (Mary Ann) Wines, Lynn (Jim Berounsky) Wines, Mary (Kelly) Coleman, Michael Wines; and two grandsons, Bryan Wines and Riley Coleman.
She was preceded in death by her husband, Leo, on September 8, 1973; and her parents.
Visitation will be from 4 p.m. until 8 p.m. on Tuesday, October 15, 2013 at Justen Funeral Home & Crematory, 3700 W. Charles J. Miller Road, McHenry.
Visitation will resume Wednesday, October 16, at the funeral home from 8:15 a.m. until prayers at 9:15 a.m., then leaving for the 10 a.m. funeral Mass at Christ The King Catholic Church, 5006 E. Wonder Lake Road, Wonder Lake, IL 60097.
Interment will be in Christ the King Cemetery, Wonder Lake.
In lieu of flowers, memorials may be made to The Assisi Health Care Center of Clare Oaks, 825 Carillon Drive, Bartlett, IL 60103.
For information, please call the funeral home at 815-385-2400, or visit www.justenfh.com, where friends may leave an on-line condolence message for her family.

To leave a condolence, you can first sign into Facebook or fill out the below form with your name and email. [fbl_login_button redirect="https://justenfh.com/obituary/dolores-helen-wines/?modal=light-candle" hide_if_logged="" size="medium" type="login_with" show_face="true"]
×