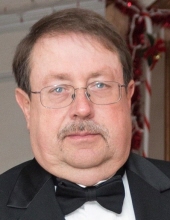 Donald A. Fafara of Cary Illinois passed away in his home on April 27, 2019 surrounded by his family at the age of 63 after a year long battle with cancer.

Donald was born to parents Stanley and Helen Fafara on November 9, 1955 in Chicago, Illinois. Donald grew up on the south side of Chicago or as he called it, “the best side of the city”. He graduated from Hubbard High School in 1973, going on to receive a Bachelor of Science in Biology from Elmhurst College in 1980.

Donald was married to his wife, Patricia, on October 31, 1987. Together, they lived in Elmhurst, Illinois for 7 years before moving to Cary in 1996. They are the proud parents of two children, a daughter Antoinette and a son Luke.

Throughout his life, Donald and his father, Stanley, owned and operated a number of businesses within the city of Chicago. Beyond his various businesses, Donald always had a great love for horse racing, a love which he passed on to his daughter, Antoinette. Together, they fulfilled their lifelong dream, founding a racing company and racing horses in Illinois, Indiana, and Arkansas. Donald was also an avid cyclist, riding his bike 20 miles a day in the neighborhoods of Cary and the bike paths in the surrounding area.

He was preceded in death by his son, Luke Fafara; mother, Helen (Czech) Fafara; and father, Stanley Fafara.

Donald will be cremated and his ashes will remain with his wife and daughter. In lieu of flowers please donate to Elmhurst College at https://www.elmhurst.edu/give/ or by mail to Elmhurst College Office of Institutional Advancement 190 Prospect Ave Elmhurst, IL 60126.

To leave a condolence, you can first sign into Facebook or fill out the below form with your name and email. [fbl_login_button redirect="https://justenfh.com/obituary/donald-a-fafara/?modal=light-candle" hide_if_logged="" size="medium" type="login_with" show_face="true"]
×