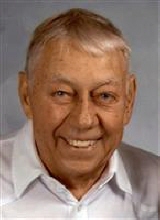 Donald C. Sturm D.D.S., age 86, of Wonder Lake, died Tuesday, February 25, 2014 at JourneyCare in Barrington with family at his side.
He was born May 19, 1927 in Macomb to George Albert and Vera Mae (Hickman) Sturm. Donald joined the Navy immediately after he graduated from Macomb High School in 1945, and served as a Pharmacist’s Mate. After his honorable discharge from the Navy, he married his high school sweetheart, Esther Chloe Vogler, on February 12, 1949 in Macomb.
Donald attended Western Illinois University in Macomb and then transferred to Loyola University’s School of Dentistry where he received his D.D.S. in 1953.
Donald and Esther moved to Wonder Lake and have been residents there since 1953. There he practiced in the same building with Dr. S.L. Ruggero on Hancock Drive from 1953 until 1961. He continued his own practice next door until he retired at the age of 72. During his lifetime, he has been a member of the Pierre Fauchard Honor Society, a fellow of the F.A.G.D. Academy of General Dentistry, and a member and Past President of McHenry County Dental Society. He also was a member of the Illinois State Dental Society and enjoyed being on the Executive Council, as well as The American Dental Society.
He has always enjoyed living in Wonder Lake and watching spectacular sunsets over the lake. Dr. Sturm was involved with the Wonder Lake Community by serving on the Harrison School Board, being a member of the Wonder Lake Chamber of Commerce, a member of the Board of Directors of the Wonder Lake State Bank, a delegate to the MPOA and a past Cubmaster of Troop 456. He was honored by being chosen Parade Grand Marshall of the Wonder Lake 4th of July Parade.
For relaxation, he loved to golf, race sailboats, fish, hunt, and travel and was a member of the McHenry Country Club for 60 years.

To leave a condolence, you can first sign into Facebook or fill out the below form with your name and email. [fbl_login_button redirect="https://justenfh.com/obituary/donald-c-sturm-d-d-s/?modal=light-candle" hide_if_logged="" size="medium" type="login_with" show_face="true"]
×