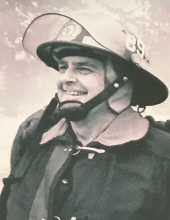 Donald L. Lechner, age 84, of McHenry, passed away peacefully on Wednesday, August 21, 2019 at Wauconda Care Center, Wauconda IL, surrounded with family.  He was born in Chicago on October 9th, 1934 to George A. and Irma (Ille) Lechner.  Donald married the love of his life, Joan Gedde, on May 19, 1956 in Park Ridge.

Donald was an apprentice in the Chicago Carpentry Union and built homes in the Skokie and North Shore area.  He was sworn in as a fulltime fireman in the Des Plaines Fire Department on June 24, 1963.  He later retired on February 4, 1986.

He moved to the McHenry area on Justen Road where he established his horse farm.  He was known to many people for showing and breeding his prized horses.

Donald was very proud to be a Nunda Fire Protection District Trustee in 1987.  He later became the districts president in 1990.

Don and Joan both proudly ran a Wick Homes Franchise.

A private inurnment will take place at Windridge Memorial Park.

For information please call the funeral home at 815-385-2400, or visit www.justenfh.com, where friends may leave an on-line condolence message for Donald’s family.

To leave a condolence, you can first sign into Facebook or fill out the below form with your name and email. [fbl_login_button redirect="https://justenfh.com/obituary/donald-l-lechner/?modal=light-candle" hide_if_logged="" size="medium" type="login_with" show_face="true"]
×