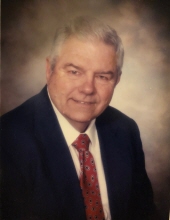 Donald P. Doherty, age 91, passed away Wednesday, November 21, 2018, surrounded by his family. Born Sept. 4th 1927 in McHenry to Paul J. and Vera Bolger Doherty,
Donald meant the world to his family. He was a role model to his children and an inspiration to his grandchildren. He always had a kind word and his generosity touched many. Donald always said it was a privilege to work. He felt he never worked a day in his life because he truly loved what he did. He loved being a resident of McHenry all of his life. Donald Doherty didn’t only live in McHenry, he LIVED McHenry. He was honored to be Mayor of a city that he cherished for 12 years. Green Street, home to Bolger Drug Store, McHenry City Hall, his home and his church, held a special place in his heart. He proudly served his country in the United States Army, and he served his community in many ways. He served on the McHenry County Board and was a member of many organizations including the McHenry Chamber of Commerce, McHenry County Catholic Education Foundation and the Knights of Columbus. He was a McHenry High School distinguished graduate and McHenry Fiesta Days Parade Marshal. He was also a recipient of the Frank E Low Award.
He enjoyed going for car rides, going to the McHenry Country Club on Thursday nights and playing bingo with his friends.
Survivors include ten children, Colleen Jackson of Woodstock, Jay (Colleen Drumm) Doherty of Chicago, Celeste (Michael) Heidemann of McHenry, Cynthia (David) Henderson of McHenry, Christine (Kenne) Ludwig of McHenry, Carolyn (Bob) Sweeney of Woodstock, Joseph (Kimmy) Doherty of McHenry, Connie (Joe) Bopp of Sharon, WI, Catherine (John) Brodbeck of Crystal Lake, and Carmel (Donald) Ray of Temple, Texas; 21 grandchildren, Courtney (Joe) Fisher, Katelynn (Matthew) Fisher, Jay, Ignatius, Joseph and Rosalie Doherty, Michael and Adam Heidemann, Patrick and Sarah Jane Henderson, Phillip (Lauren), Lindsey, and Benjamin Ludwig, Erin and Kevin Sweeney, Casey and Delaney Doherty, Nathan (Cassie) and Mary Bopp, and Joseph and David Ray; 7 great-grandchildren, Ellody, Ehlyn, Evangeline, Jackson, and Olive Fisher, Penelope Ludwig, and baby girl Ludwig; and a sister, Mary Jean Hopkins.
He was preceded in death by his parents; and beloved wife Rosalie, a sister Helen Ann; Sister in law Jinny Williams, Bea Newkirk and Son in law Randy Jackson.
The visitation will be from 3 p.m. until 8 p.m. Sunday, November 25, 2018, at The Church of Holy Apostles, 5211 Bull Valley Rd, McHenry. On Monday, November 26, friends should go directly to meet the family at St. Patrick Catholic Church, 3500 W. Washington Street, McHenry, where the funeral Mass will be celebrated at 10 a.m. Interment will follow at St. Patrick Countryside Cemetery, McHenry.
Donald’s family suggests memorials to St. Patrick Countryside Cemetery Enhancement Fund, 3500 W. Washington St. McHenry, IL 60050 or to Misericordia, 6300 N Ridge Avenue, Chicago IL 60660.
Arrangements were entrusted to Justen Funeral Home & Crematory, McHenry. For information, call the funeral home at 815-385-2400. Friends may leave an on-line condolence to the family at www.justenfh.com.

To leave a condolence, you can first sign into Facebook or fill out the below form with your name and email. [fbl_login_button redirect="https://justenfh.com/obituary/donald-p-doherty/?modal=light-candle" hide_if_logged="" size="medium" type="login_with" show_face="true"]
×