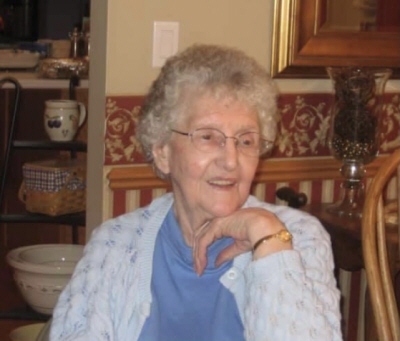 Dorothy Fay, age 101, of Woodstock, IL passed away on Friday, August 6, 2021 at home surrounded by her loving family. She was born on July 28, 1920 to Fred William Bremer and Ethel M. Beardsley Bremer Louis in Manistique, MI. Dorothy met and married the love of her life Kenneth Fay on June 1, 1940 in Dubuque, Iowa.

Dorothy has been a resident of Woodstock for over 80 years. She loved to play bingo so much that she traveled around the county to be able to play seven days a week. It was more than just playing bingo to her, it was a chance to spend time with her friends and catch up on the latest details of their lives. Dorothy was also known to many as Grandma Dorothy as she babysat many children in the community throughout the years. She was very independent and drove well into her 90s and continued to live in her own home. She had lots of hobbies and interests like knitting, watching game shows, reading, playing yahtzee and cheering for her beloved Cubs. Her greatest love however was being with friends and family that she adored and making memories to cherish for a lifetime.

Arrangements have been entrusted to Justen Funeral Home and Crematory. For information, please call the funeral home at 815-385-2400 or visit www.justenfh.com where friends and loved ones may share memories of Dorothy on her tribute wall.

To leave a condolence, you can first sign into Facebook or fill out the below form with your name and email. [fbl_login_button redirect="https://justenfh.com/obituary/dorothy-fay/?modal=light-candle" hide_if_logged="" size="medium" type="login_with" show_face="true"]
×