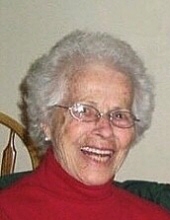 Edith Margaret Stewart Nimsgern, age 95, a longtime resident of McHenry, passed away peacefully on October 8, 2019. Born on November 3, 1923 to Albert and Eleanor (Wheeler) Stewart, Edith was raised on the family farm near Richmond, where she attended school.

Edith graduated from Sherman Hospital Nursing School in 1944. Following school, Edith felt a calling to use her nursing education and joined the United States Army. From 1944 to 1946, she proudly served her country as a U.S. Army Nurse, stationed in North Africa and later in India. After her honorable discharge from the Army, Edith returned to Illinois, and began her lifetime membership with the McHenry VFW Post 4600. On May 12, 1948, she was united in marriage to Lawrence Nimsgern, and concentrated on building and raising her family.

Edith was a master at balancing her life’s two great joys: being a wife and mother, and working as a registered nurse in the community she loved. In 1950, Edith and her family relocated from Richmond to McHenry. Edith was a valued nurse who provided excellent care from the opening of McHenry Hospital in 1956 until 1965, after which she became a beloved school nurse for McHenry School District 15. After her retirement in 1985, Edith enjoyed volunteering as a part of the NIMC Auxiliary at the McHenry Hospital where she helped out wherever needed, even in the gift shop.

Edith enjoyed playing golf, bowling, and she loved to travel. She was always working on a jigsaw puzzle or reading a good book. She never had a negative comment to make about anyone, and she will be lovingly remembered as a very sweet woman who refused to engage in any arguments nor did she have harsh words with anyone, ever.

Visitation will be from 1 p.m. until 4 p.m. on Saturday, October 19, 2019 at Justen Funeral Home & Crematory, 3700 W. Charles J. Miller Road, McHenry, IL 60050. In honor of Edith’s exceptionally full life, a funeral blessing will be celebrated at 4 p.m. in the funeral home, with military honors to follow.

For information please call the funeral home at 815-385-2400, or visit www.justenfh.com where friends and loved ones may share memories of Edith on her Tribute Wall.

To leave a condolence, you can first sign into Facebook or fill out the below form with your name and email. [fbl_login_button redirect="https://justenfh.com/obituary/edith-margaret-stewart-nimsgern/?modal=light-candle" hide_if_logged="" size="medium" type="login_with" show_face="true"]
×