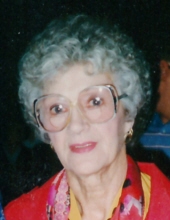 Edna V. Thelen-Dombrowski, age 93, of McHenry, passed away on June 6, 2018 at Arboria Assisted Living & Memory Care of Long Grove. She was born to John and Blanche Milewski on September 24, 1924 in Hamtramck, MI.

During WWII, Edna served her country as a Rosie The Riveter for the Detroit War Plant Factory. After the war, Edna married her first husband, Peter Thelen, and started a family. The two were happily married for 28 years until his passing in 1972.

Edna worked for 25 years at Oaks Manufacturing as a Forelady in the Switch Department. On Feb 3, 1973, she was united in marriage to Elmer Joseph Dombrowski at St. Patrick’s Church in McHenry.

In her leisure time, Edna loved to polka dance, work with ceramics, and was an avid golfer. She traveled often with her second husband, Elmer, and together, they took many cruises. A doting mother and grandmother with a giving heart, Edna will be missed by all who knew her.

Interment will be at St. Patrick’s Countryside Cemetery.

For those wishing to send an expression of condolence, the family suggests memorials in honor of Edna to the St. Jude Children’s Research Hospital Tribute Program, P. O. Box 1000, Dept. 142, Memphis, TN 38148.

For information, please call the funeral home at 815-385-2400, or visit www.justenfh.com, where friends may leave an on-line condolence message for Edna’s family.

To leave a condolence, you can first sign into Facebook or fill out the below form with your name and email. [fbl_login_button redirect="https://justenfh.com/obituary/edna-v-thelen-dombrowski/?modal=light-candle" hide_if_logged="" size="medium" type="login_with" show_face="true"]
×