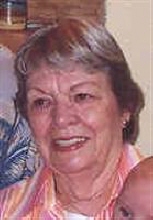 Elizabeth K. “Betty” Looze, age 86, of McHenry, died Saturday, November 19, 2011, at Centegra Hospital-McHenry.
She was born April 7, 1925 in Ringwood to Edward and Elizabeth (Pint) Thompson.
Born in Ringwood, she attended Ringwood School, Skidmore Farms Lincoln School, and graduated with the McHenry High School class of 1943. She later attended night school for clerical and secretarial courses. She lived for a time in Omaha from 1952 until returning to McHenry in 1956. She was employed as a legal assistant for the Loose-Kinne Law Office for over 40 years.
She is survived by two children, Richard (Ernstiena) Clark of Crystal Lake and Susan (Allard) Bayne of Cleveland, Ohio; five step-children, Ray (Helene) Looze, Don Looze, Jon K. (Donna) Looze, Richard Looze, and Jack (Judy) Looze; eight grandchildren, Kimberly (Matthew) Erbtoeser, Kathryn (James) Palmquist, Nichlos Clark, Willem (Beth) Lulinski, Monique (Roger) Volkening, Allard IV (Suzanne) Bayne, Timothy (Summer) Bayne, Shawn (Kelly) Bayne; 16 great grandchildren; two brothers, James Thompson and Charles Thompson, both of McHenry; and a sister, Grace Mary (Marion) Messman of Woodstock.
She was preceded in death by her husband, John Looze in 1984; a son, Robert Clark in infancy; a sister, Agnes (Nick) Adams; five brothers, John, Ed, George, Kenneth, and William Thompson; a sister-in-law, Isabell Thompson; and her former husband, Richard Clark in 2010.
Friends may visit with her family from 2 p.m. to 4 p.m. on Sunday, November 27, 2011 at Justen Funeral Home & Crematory, 3700 W. Charles J. Miller Road, McHenry, IL 60050.
The funeral blessing will be at 4 p.m. at the funeral home.
Inurnment will be at 11:25 a.m. on Monday, November 28, in St. Mary’s Cemetery, McHenry.
For those wishing to send an expression of condolence, her family suggests memorials to the Adult & Child Rehab Center of McHenry County, 708 Washington St., Woodstock, IL 60098.
Friends may send the family an on-line condolence at www.justenfh.com. For information, call the funeral home at 815-385-2400.