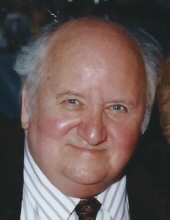 He was a veteran of the Air National Guard, and then became a member of the U.S. Air Force when his unit was activated during the Korean War. He served in Germany and France, as well as Korea. After his discharge, he worked for the railroad for 37 years, and retired at the age of 65. During his tenure with the railroad, he was a member of the Brotherhood of Railway Airline & Steamship Clerks of the AFL-CIO.

For those wishing to send an expression of condolence, his family would appreciate donations to Ernie’s Tribute Fund, which may be found in a link with his obituary at www.justenfh.com.

For information, please call the funeral home at 815-385-2400, or visit www.justenfh.com, where friends may leave an online condolence message for his family.

To leave a condolence, you can first sign into Facebook or fill out the below form with your name and email. [fbl_login_button redirect="https://justenfh.com/obituary/ernest-e-ernie-schulz/?modal=light-candle" hide_if_logged="" size="medium" type="login_with" show_face="true"]
×