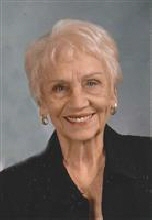 Esther Chloe Sturm of Wonder Lake, IL, passed away on January 18, 2015, in her home in Wonder Lake with her family at her side.

She was born on February 13, 1929, to Clarence and Ocie Vogler in Macomb, Illinois. As a young child, she attended a one-room school house, and was later able to graduate from high school a year early.

While attending school, she met her future husband, Donald C. Sturm of Macomb, Illinois. Donald enlisted in the U. S. Navy during the end of WWII. Since he had no middle initial in his name, he took the letter C from Esther’s middle name as his official initial. When he came home, he married his high school sweetheart, Esther, on February 12, 1949. They were blessed with 65 years of marriage.

Esther and Don moved to Chicago, IL, where Don finished working on his DDS at Loyola University’s School of Dentistry. The big city life was quite different from Macomb, but Esther soon acclimated herself to the city and began a new life and a new job. It was also in Chicago that they started their family of nine children, and then moved to a little town in northern Illinois called Wonder Lake.

It is easy to say that nine children and a husband kept her quite busy. As a mother and homemaker, she simply was the best. She always put her children and husband first. Continually supportive and loving, she raised her children with common sense, and the knowledge that they were always loved and supported.

Living in Wonder Lake for most of her life provided her with many opportunities to watch her children grow and enjoy the lake. During those years, she had many hobbies: golf, bowling, sewing, reading and upholstering. While not a hobby, homework and meals kept her always on the move. In the last few years, she took care of her husband, who died on February 25, 2014.

Visitation will be at 11 a.m., this coming Saturday, January 24, 2015, at Justen Funeral Home and Crematory, 3700 W. Charles J. Miller Road, McHenry. A service will be held following the visitation at noon.

To leave a condolence, you can first sign into Facebook or fill out the below form with your name and email. [fbl_login_button redirect="https://justenfh.com/obituary/esther-chloe-sturm/?modal=light-candle" hide_if_logged="" size="medium" type="login_with" show_face="true"]
×