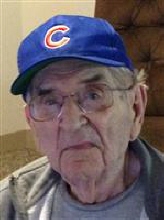 Eugene L. “Gene” Adams, age 95, of McHenry, died Saturday, Feb. 6, 2016, at Alden Terrace of McHenry.  Born  June 13, 1920 in McHenry to Lewis and Clara (Pitzen) Adams, Gene was a lifelong resident of McHenry and a lifelong member of St. Mary’s Church in McHenry.   A 1938 graduate of McHenry High School, Gene worked at Pitzen’s Camp (“The Bay”) both while going to high school as well as after graduation.
At the age of 21, he was inducted into the U. S. Army, where he served during World War II from 1941 until 1945.  As an infantryman, Gene was awarded the Asiatic Pacific Theater Ribbon with 3 bronze battle Stars, the Philippine Liberation Ribbon with 1 bronze battle star, and a Purple Heart Medal.
After his honorable discharge, Gene married Marion Hausheer at St. Mary’s Church in McHenry on August 22, 1946.  He also began employment with Henry Muntz & Son of Elgin as a on-the-road hardware salesman.  One of the accounts he called on was Lee & Ray Electric, and in the early 1950’s, he began his relationship in the business as part-owner.  When the new store opened in 1963, his ownership role grew until ownership was turned over to his sons, Paul and Greg in December of 1973.  From 1974 to his retirement in June of 1985, Gene worked for Englewood Electrical Supply.
After retirement, Gene enjoyed his hobbies of fishing and gardening, as well as getting together with his friends.  A notable hobby that spanned some 70 years in Gene’s lifetime was his monthly card club gathering with his buddies.  In addition, he often referred to himself as the V.P. of the L.C.G. (the Leinenkugal Choral Group), an annual fishing trip at Clam Lake, with planning for the event taking place at their “mid-winter convention”.
Other activities during Gene’s lifetime included volunteering along with his wife for the FISH food pantry in McHenry; longtime membership in the Catholic Order of Foresters St. Mary’s Court 594; ushering at St. Mary’s Church; membership and past-presidency of the McHenry Kiwanis, where he organized the Peanut Day fundraiser for several years; involvement with the beginning of Little League in McHenry; and membership in VFW Post 4600 in McHenry.
Survivors include five children, John “Jack” (Janet) Adams, Paul (Marjory) Adams, Mark (Sharon) Adams, Mary (Tom) Knaack, and Patricia (Mark) Giacomo; 14 grandchildren; and 5 great grandchildren.
He was preceded in death by his parents; his wife, Marion, on August 26, 2009; his son, Greg, in 2003; and his brother, Charles “Bud” “Sharky” Adams.
Visitation will be from 4 p.m. to 7 p.m. Wednesday, February 10, 2016, at Justen Funeral Home & Crematory, 3700 Charles J. Miller Road, McHenry, IL   60050.  Visitation will resume Thursday at the funeral home prior to the funeral Mass (times pending) at St. Mary’s Church, 1401 N. Richmond Road, McHenry.  Interment will be in St. Mary’s Cemetery, McHenry.
Memorials are suggested by his family to either FISH, P. O. Box 282, McHenry, IL 60051; to the Montini Catholic School Foundation, 1405 N. Richmond Road, McHenry, IL 60050; or to Family Centered Hospice, 2171 Executive Drive, Ste. 450, Addison, IL  60101.
For information, please call the funeral home at 815-385-2400, or visit www.justenfh.com, where friends may leave an on-line condolence message for his family.

To leave a condolence, you can first sign into Facebook or fill out the below form with your name and email. [fbl_login_button redirect="https://justenfh.com/obituary/eugene-l-adams/?modal=light-candle" hide_if_logged="" size="medium" type="login_with" show_face="true"]
×