She was born June 28, 1919 in Virginia, Minnesota to Hulda (Zackrison) and Ole Hoglund. She grew up in Parkville, Minnesota and graduated from Mountain Iron High School in 1937.

Evelyn married Clyde C. Koski on July 31, 1943 in Ely, Minnesota. They made their home in Virginia, Minnesota.   She worked for Northwestern Bell Telephone Company, and retired after 30 years, 7 months, and 22 days of employment.

Evelyn was a talented seamstress and wonderful baker, and over the years she kept everyone entertained with a never-ending supply of jokes. She loved a good garage sale, and never passed up an opportunity to hit the casino. Regardless of her winnings, she always counted herself a lucky person.

Since 1996, she has made her home at Lake Vermilion (Cook, Minnesota) during the summers and wintered in McHenry, Illinois near her daughter.

There will be no visitation.  The cremation rite will be accorded privately.

Her family suggests memorials in her name be made to The Centegra Health System Foundation (for the benefit of Centegra Hospital-McHenry), 385 Millennium Drive, Crystal Lake, IL 60012.

For information, call Justen Funeral Home & Crematory at 815-385-2400.  Friends may send the family an on-line condolence at www.justenfh.com. 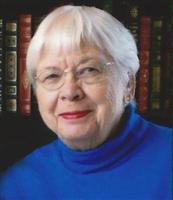 To leave a condolence, you can first sign into Facebook or fill out the below form with your name and email. [fbl_login_button redirect="https://justenfh.com/obituary/evelyn-h-koski/?modal=light-candle" hide_if_logged="" size="medium" type="login_with" show_face="true"]
×