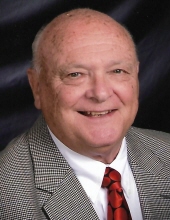 George A. Lechner, age 79, of McHenry and former long-time residents of Palatine, entered into the presence of his Lord and Savior, Jesus Christ on Saturday, January 20, 2018, at JourneyCare in Barrington.

George graduated from Maine Township High School East in 1956. He first worked as a printer for General Telephone Directory. In 1968, George joined the Des Plaines Fire Department. During his 20 year career, he attained the rank of Deputy Chief before retiring in 1988. George remained active in the field of fire service, working from 1991 through 1998 in the Arlington Heights Emergency Management Department. For 8 years, he worked for the office of the Illinois State Fire Marshal. In 1999 and early 2000, he was the Y2K Civilian Project Manager for Northwest Community Hospital in Arlington Heights.
George was awarded honorary membership in the Fire Investigators Strike Force. He also served as a Trustee for the Palatine Rural Fire Protection District, and was a member of the Illinois Professional Firefighters Association.

George raised pigeons from the time he was 7 years old until moving from Palatine in 2012. He was a “lifetime member” of the American Giant Homer Association, being recognized as a “Master Breeder” and holding many positions in the club.

George was a member and deacon of Lakeland Baptist Church in Lake Villa.

In addition to his parents, George was preceded in death by his grandson, Michael Shane Lechner.

Visitation will be from 10 a.m. until noon Saturday, January 27, 2018, at Justen Funeral Home & Crematory, 3700 Charles J. Miller Road, McHenry, IL 60050. The funeral service will be at noon in the funeral home. The cremation rite will be accorded privately.

To leave a condolence, you can first sign into Facebook or fill out the below form with your name and email. [fbl_login_button redirect="https://justenfh.com/obituary/george-a-lechner/?modal=light-candle" hide_if_logged="" size="medium" type="login_with" show_face="true"]
×