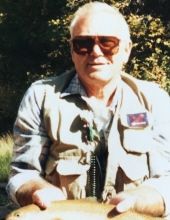 George proudly served his country in the US Navy during WWII, and he participated in the Pacific Theater. After his service, George discovered a career in the printing industry as a pressman, which he later retired from. He was an avid golfer and also a great fisherman. George was a collector of many things, but model airplanes were his passion, he loved building and flying them.

In addition to George’s parents, he was preceded in death by his son, Jim Droysen, a grandson, George Jr., and two sisters, Dorothy and Shirley.

The cremation rite was accorded privately. Services were private for his family. In the Spring, a burial with military honors will be in Abraham Lincoln National Cemetery, Elwood, IL.

To leave a condolence, you can first sign into Facebook or fill out the below form with your name and email. [fbl_login_button redirect="https://justenfh.com/obituary/george-droysen-jr/?modal=light-candle" hide_if_logged="" size="medium" type="login_with" show_face="true"]
×