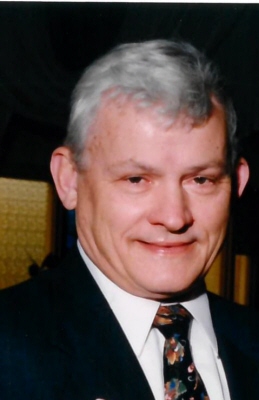 Preceded in death by his parents, George Shields and Lucille (Smith) Shields and a brother, William Shields.

George graduated from Blue Island High School, Class of 1957. He attended the University of Illinois Institute of Aviation at Urbana-Champaign as an Evans Scholar where he earned his A & P (Airframe & Powerplant) Aircraft Mechanics License.

He started his career in the airline industry as a ticket agent for American Airlines.

He entered the US Navy where he served on Active Duty- Mediterranean Cruise on the U.S.S. Sabine, with his last duty assignment on the U.S.S. Canberra CAG2. After the Navy, he worked for Crane Company in Chicago as an order correspondent, where he met his future bride in 1965. George and Janyce were married on January 21, 1967 at Queen of Martyrs Church, Evergreen Park, Illinois.

George started working for TWA as an Aircraft Mechanic in 1968 at O’Hare International Airport in Chicago, Illinois.

At TWA, George worked the line. He especially enjoyed engine changes and taxiing aircraft. Later in his career, he worked as a Crew Chief. TWA was acquired by American Airlines where he worked as a Coordinating Crew Chief until he retired in December, 2004.

In 2006, George and Janyce moved to Belvidere, Illinois to be closer to family.

Over the years, George and Janyce enjoyed many trips. Some of their fondest memories were from going to Disney World with family and visiting lifelong friends Larry and Carol in Anchorage, Alaska. They also enjoyed yearly TWA picnics and luncheons with the TWA Seniors Club.

In lieu of flowers, memorial gifts can be made in his name to The Church of Holy Apostles, McHenry, Illinois.

Arrangements have been entrusted to the Justen Funeral Home & Crematory in McHenry, Illinois. For information, please call the funeral home at 815-385-2400 or visit www.justenfh.com, where friends and loved ones may share memories of George on his tribute wall.

To leave a condolence, you can first sign into Facebook or fill out the below form with your name and email. [fbl_login_button redirect="https://justenfh.com/obituary/george-edward-shields/?modal=light-candle" hide_if_logged="" size="medium" type="login_with" show_face="true"]
×