Formerly of Chicago, George was a 1946 graduate of St. Rita High School. He summered in the McHenry area until moving with his family to McHenry as a year-round resident in 1946. He built his house on Green Street in 1954, when Green Street was still a gravel road.

Prior to retirement, George was employed in auto sales by Al Blake Motors, Fury Motors, Buss Ford, Overton Cadillac, and finished his career at the age of 84 with Reichert Chevrolet and Pontiac.

George’s hobbies were golfing, bowling, and fishing. Throughout the years, his many friends and neighbors knew him as ‘Whitey’.

For 38 years, George enjoyed being a volunteer fireman with the McHenry Township Fire Protection District. He also was a member of St. Mary’s Church in McHenry, the Catholic Order of Foresters #594, and Moose Lodge #691.

He was preceded in death by his parents; a brother, Hilary Rodenkirch; a sister, Adelaide Fitzgerald; and an uncle, George “Dots” Steilen.

Interment will be in St. Mary’s Cemetery, McHenry.

For those wishing to send an expression of condolence, his family suggests memorials to Mooseheart Charities. 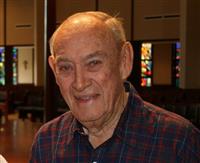 To leave a condolence, you can first sign into Facebook or fill out the below form with your name and email. [fbl_login_button redirect="https://justenfh.com/obituary/george-j-rodenkirch/?modal=light-candle" hide_if_logged="" size="medium" type="login_with" show_face="true"]
×