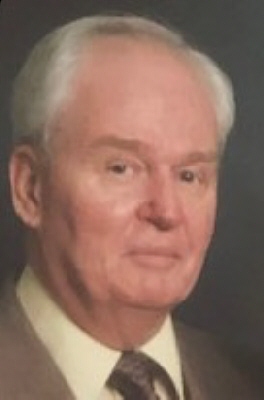 George W. Saunders, age 97, of Carol Stream, Illinois, passed away on July 29, 2020, at Johnson Healthcare in Carol Stream. He was born on May 28, 1923, to George and Jane (Wooley) Saunders in Queens Village, NY. He was united in marriage to his loving wife Ellen Jones.

George proudly served his country in the U.S. Army and mustered out as a Corporal. He worked as an Engineering Manager for Underwriter’s Laboratory, performing testing on electronic devices, until his retirement. In college, George played third base, a.k.a. the “hot corner”, for the school baseball team.

George was very friendly and outgoing – people genuinely liked him, and he got along with everyone. He loved camping in Door County, Wisconsin so much that he had a cabin built there that is still in the family. His family says that he could break into any safe. George was a Troop Master for his sons’ Boy Scout troop in Glenview. He was also a Mason at the local Masonic Lodge for over 50 years.

George is survived by his sons, Walter Saunders, of Normal, and Roger Saunders of Albuquerque, New Mexico, and his daughter, Elizabeth Bauer of Carol Stream.

He was preceded in death by his wife, Ellen Saunders, and his parents, George and Jane Saunders.

Arrangements have been entrusted to Justen Funeral Home & Crematory in McHenry. For information, please call the funeral home at 815-385-2400 or visit www.justenfh.com, where friends and loved ones may share memories of George on his tribute wall.

To leave a condolence, you can first sign into Facebook or fill out the below form with your name and email. [fbl_login_button redirect="https://justenfh.com/obituary/george-w-saunders/?modal=light-candle" hide_if_logged="" size="medium" type="login_with" show_face="true"]
×