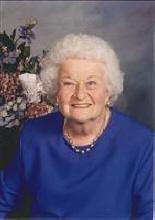 Gertrude E. “Kay” Diederich, age 96, of Wonder Lake, died Wednesday, May 21, 2014, at JourneyCare Hospice in Woodstock with her daughter by her side. She was born September 19, 1917 in Chicago to George B. and Elise (Schow) Hesbol. Always proud of her Norwegian heritage, she was also a proud first generation American.
A summer resident of Wonder Lake from 1939, she and her family became year-round residents in 1953. She was employed at Sears in Chicago for nine years, where she was a manager in retail sales. After moving to Wonder Lake, she owned and operated Kay’s Gift Shop in Wonder Lake from 1953 until 1986. In 1987, she began working at Jewel in Crystal Lake, where she greeted customers at food demos and was the front-end person until the age of 80. From 1986 until the age of 90 in 2007, she volunteered at the hospital, again working in retail sales at the gift shop at the former NIMC (Centegra-McHenry).
She attended Wonder Lake Bible Church for over 50 years, where she also served as a Sunday School teacher for over 30 years.
During her leisure time, she enjoyed watching the Wonder Lake Water Ski Team perform, as well as attending the Woodstock City Bank concerts. She was an avid Chicago White Sox fan.
She is survived by her daughter, Linda Farris of Wonder Lake; a niece, Kathryn Husser of Vancouver, BC, a great-niece and great-nephews; as well as her church family and friends.
Gertrude was preceded in death by her parents; her husband, Eldon, in 1976; a son, Michael Diederich in 1978; a granddaughter, Tracy Michelle Farris in 1971; and two brothers, Earling (the late Mildred) and Niels “Mel” (the late Mildred).
Visitation will be from 4 p.m. until 7 p.m. Thursday, May 29, 2014, at the Wonder Lake Bible Church, 7501 Howe Road, Wonder Lake, IL 60097. The funeral service will be at 7 p.m. at the church. The graveside service will be at 11 a.m. Friday at Memorial Park Cemetery, Woodstock.
Interment will be Friday at McHenry County Memorial Park, Woodstock.
For those wishing to send an expression of condolence, memorials are suggested to the Wonder Lake Bible Church or to Family Alliance.
Arrangements were entrusted to Justen’s Wonder Lake Funeral Home, Wonder Lake. For information, please call the funeral home at 815-728-0233, or visit www.justenfh.com.
Special thanks are extended to the staff of Family Alliance and her caregivers for their love and support.

To leave a condolence, you can first sign into Facebook or fill out the below form with your name and email. [fbl_login_button redirect="https://justenfh.com/obituary/gertrude-e-39kay39-diederich/?modal=light-candle" hide_if_logged="" size="medium" type="login_with" show_face="true"]
×