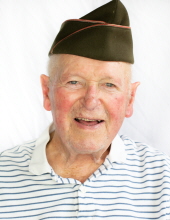 Harry, a lifelong resident of Johnsburg, was well-known and respected in the community and an example of the Greatest Generation. He was most proud of his family and offered his life lesson to his family of always saying “Good Morning”, “Thank you” and “Goodbye”.

At the age of 13, he went to work for his father at Smith’s Central Garage in Johnsburg, and was a life-long auto mechanic, working with his father, Fred and his brother Norb, until 1979 when it closed.  He then opened “Harry’s Repair” at the end of “Harry’s Way” in Johnsburg specializing in antique cars.

Harry proudly served his country in the U.S. Army in Europe during World War II.  A recent highlight of his military career was his participation in an Honor Flight to Washington D.C.

Harry was a member of St. John the Baptist Catholic Church in Johnsburg, and the Catholic Order of Foresters, Court 96.   He was a member of VFW Post 4600, American Legion Post 491, and a long-time member and former Board member of the Johnsburg Community Club.  Harry was also one of the original members of the McHenry Township Fire Protection District, Company 2 (Johnsburg) where actively he served for 35 years.

He was preceded in death by his parents, two brothers, Fred and Norbert, and a sister, Marie Kruger.

Visitation will be from 3 p.m. until 8 p.m. Wednesday, February 12, 2020, at Justen Funeral Home & Crematory.  A walkthrough by members of the fire department will be at 7 p.m.

For those wishing to send an expression of condolence, his family suggests memorials in honor of Harry be made to St. John the Baptist Church or to the Honor Flight program at https://www.honorflight.org/donate-now .  For information, please call the funeral home at 815-385-2400, or visit www.justenfh.com, where friends and loved ones may share memories of Harry on his tribute wall.

To leave a condolence, you can first sign into Facebook or fill out the below form with your name and email. [fbl_login_button redirect="https://justenfh.com/obituary/harold-b-smith/?modal=light-candle" hide_if_logged="" size="medium" type="login_with" show_face="true"]
×