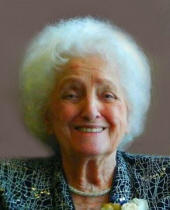 Helen Wylupek, age 93, of Wauconda, passed away Sunday, May 30, 2016, at Hillcrest Nursing Center in Round Lake Beach.

She was born October 25, 1922 in Altoona, PA, to Edward and Marcianna (Novacka) Wydra, immigrants from Poland who settled in the coal country of Eastern Pennsylvania. As a young woman, she lived in Camden, NJ, and was forced to drop out of school during the Depression to work in cigar factories in Camden and Philadelphia. On November 14, 1942, she married Walter Wylupek at St. Joseph’s Polish Catholic Church in Camden. She continued working while her husband was in the U. S. Army in Europe during WWII. In 1947 Helen and Walter moved to Pennsauken, NJ, where they raised two daughters. After Walter passed in 2005, Helen moved to Illinois to be closer to family.

Helen was an amazing mother and grandmother. She took great pride in her home and in being a fantastic cook. She loved reading, knitting, crocheting, and taking pen to paper to write long letters to friends and relatives in her beautiful handwriting.

In addition to her parents, she was preceded in death by her husband, Walter Wylupek, on February 13, 2005; and two brothers, Henry and Alexander Wydra.

To leave a condolence, you can first sign into Facebook or fill out the below form with your name and email. [fbl_login_button redirect="https://justenfh.com/obituary/helen-wylupek/?modal=light-candle" hide_if_logged="" size="medium" type="login_with" show_face="true"]
×