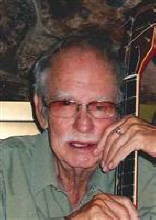 Jack G. Slaughter Sr., age 76, of McHenry, died Thursday, June 13, 2013, at Kindred Hospital in Northlake.
Born July 29, 1936 in Cleburne, Texas, he was the son of James and Susan (Fogarty) Slaughter. He married Patricia Ann Hurst on January 30, 1960 in Roselle, IL.
Jack was a resident of Chicago from 1951 until moving to McHenry in 1963. He was the owner of Stuc’s Pizza in McHenry, where he was fondly referred to as “Big Guy”. He owned the business from 1978 until selling it to his son in January of 1991. He then was employed at the local Wal-Mart store for 16 years, where he worked in several areas of the store, from electronics to assembling bicycles.
As a businessman, he was active with the McHenry Area Chamber of Commerce. For the Chamber, he also volunteered his time to plan for the annual Fiesta Days events, where he was in charge of lining up entertainment. Jack also was a member of the McHenry Rotary Club, serving as the club’s President, was a board member for Home of the Sparrow, and was the co-organizer of Wal-Mart’s “Shop with a Cop” Christmas shopping program.
An avid music lover, he taught himself to play the guitar at the age of 13, and continued his love of playing for the rest of his life. For 30 years, he was guitarist with his band, Two Beers and a Coke, playing many weddings and events in the area.
He enjoyed spending time at his second home in Adams-Friendship (WI) area, where he loved to go fishing. He also loved the company of his dogs throughout the years.
He is survived by his wife of 53 years, Patricia; two children, Jack Jr. (Lauri) Slaughter of McHenry, and Dawn (Jim) Morrison of Des Plaines; six grandchildren, Jennifer (fiancé Joe Nanez), Ryan, Matthew, Emily, Garrett and Claudia; a brother, Gene (Belinda) Slaughter of Tampa; two sisters, Joanna (Wess) Buss of Cottonwood, AZ, and Beverly Burns; a step-brother, Joe Green of New Mexico; and many nieces and nephews.
He was preceded in death by his parents.
Visitation will be from 4 p.m. to 8 p.m. Monday, June 17, 2013, at Justen Funeral Home & Crematory, 3700 W. Charles J. Miller Road, McHenry. The funeral service will be at 10:30 a.m. Tuesday at the funeral home.
Interment will be in Ringwood Cemetery, Ringwood.
For those wishing to send an expression of condolence, his family suggests memorials to the National Fragile X Foundation, 1615 Bonanza St. Suite 202 Walnut Creek, CA 94596 or http://www.fragilex.org.
For information, please call the funeral home at 815-385-2400, or visit www.justenfh.com.

To leave a condolence, you can first sign into Facebook or fill out the below form with your name and email. [fbl_login_button redirect="https://justenfh.com/obituary/jack-g-slaughter-sr/?modal=light-candle" hide_if_logged="" size="medium" type="login_with" show_face="true"]
×