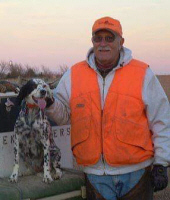 James was born June 21, 1934 in Chicago to Arthur and Edna (Johnson) LaGreca. A veteran of the United States Marine Corps, he served stateside from 1951 – 1954. On November 10, 1954, he married Barbara Alexis Hagan at Nativity Lutheran Church in Wonder Lake.

Formerly a resident of Chicago, James was a resident of Wonder Lake for over 50 years. He began his career as a firefighter with the Chicago Fire Department, where he later served as Battalion Chief. After 17 years of service, James incurred a serious injury while fighting a fire, and subsequently took an early medical retirement from the CFD. His second career was in real estate, where he was well-known throughout the Wonder Lake community and affiliated with Sullivan Realty in Wonder Lake for many years.

James was a longtime member of Nativity Lutheran Church in Wonder Lake.

An avid outdoorsman, James enjoyed hunting and fishing. In his younger years, he also enjoyed racquetball. Above all, James was devoted to his family. He was a loving husband and father who delighted in spending time with family.

In addition to his parents, James was preceded in death by his son, Scott on June 15, 2013; his grandson, Daniel Ohlson on November 28, 2011; and his sister, Barbara Fiala.

Friends may gather to visit with his family from 1 p.m. to 2 p.m. Saturday, April 1, 2017, at Justen Funeral Home & Crematory. The memorial service will be at 2 p.m. in the funeral home. Inurnment will be private.

To leave a condolence, you can first sign into Facebook or fill out the below form with your name and email. [fbl_login_button redirect="https://justenfh.com/obituary/james-arthur-lagreca/?modal=light-candle" hide_if_logged="" size="medium" type="login_with" show_face="true"]
×