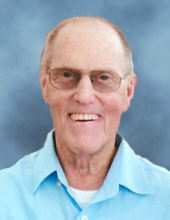 James B. Pinkstaff, 83, of McHenry IL passed away peacefully on March 26, 2019 at Wauconda Care in Wauconda, IL.  He was born on July 4, 1935 in Pinkstaff, IL to Randolph and Della (Folkers) Pinkstaff, the youngest of 9 children.

Jim was a graduate of Libertyville High School class of 1953.

He was united in marriage to Mary Jean Winkel on July 21, 1956 in Waukegan.  Jim was employed by Northern Illinois Gas Co. (Nicor) as a welder for 34 years before retiring in 1993 at the age of 58.  Upon retiring, he travelled with his wife on an extended trip out West; his only big travel adventure.  Jim liked to be at home with his family, helping friends and neighbors.  You could always count on Jim.  He was often referred to as a true gentleman, Pinky Sr. or Mr. Pinky.

A versatile athlete who excelled in all sporting activities, it was bowling that was his true passion; rolling the last of his multiple 300 games at the age of 80.  He never entered a bowling alley that he didn’t like!

After several years of coaching his kids and umpiring in softball, he spent many years enjoying his grandchildren.  He is considered by his family to be the best dad and most wonderful papa. His gentle spirit and kind soul will be missed by all who knew him.

He was preceded in death by his wife of 52 years Mary Jean, his parents and siblings Bernice, Robert, Floyd, DeWitt, Dana, Margaret, Howard and Helen.

For more information, please call the funeral home at 815-385-2400, or visit www.justenfh.com, where friends and loved ones can share a memory on Jim’s Tribute Wall.

To leave a condolence, you can first sign into Facebook or fill out the below form with your name and email. [fbl_login_button redirect="https://justenfh.com/obituary/james-b-pinkstaff/?modal=light-candle" hide_if_logged="" size="medium" type="login_with" show_face="true"]
×