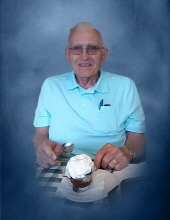 James M. Culbertson “Jim”, 91, of McHenry, IL, passed away peacefully surrounded by his family on November 23, 2020. Jim was born in Hayward, OK to Garfield and Alice on July 28, 1929.  He grew up on the family farm near Covington, OK.  In 1953, he joined the Army and was stationed in Wilmette, IL where he met Hazel.  After being discharged and finishing his degree from Oklahoma A&M College, they married in November of 1956 in Evanston IL and enjoyed 64 years together. Jim began a long career at International Harvester – Navistar from 1960 to 1989 as a Diesel Test Engineer.  Jim was involved with his sons in Cub Scout Pack 27 and Boy Scout Troop 27 for over 25 years and was honored for his dedicated service.

Jim was also involved with Bethlehem Lutheran Church as Elder and Building Trustee.  After raising their family and living in Evanston for 28 years, they moved to McHenry and enjoyed 36 years building part two of a wonderful life. After retiring in 1989, he enjoyed working in his barn and around their property until purchasing a small engine repair shop and became the owner of Precision Sharpening & Repair in McHenry for 10 years. He moved the business back to his barn in 2001 and passed the sharpening business on to his daughter in 2012.  Jim joined the McHenry Lions Club in 1990 and served as director many times and Vice President & President in 2004-2005. He served as co-chair for concession wagon, truck setup at events and maintenance, and Fiesta Days. Jim was always ready and willing to volunteer to take care of business or any task at hand. Jim was awarded a Lifetime Achievement award in 2016.  Again, Jim and Hazel were involved in their church, Shepherd of the Hills Lutheran Church in McHenry, IL. He enjoyed many friendships & fellowship times. He volunteered for many building projects and events as he was needed and able.

A family Funeral Service will be held at Justen’Funeral Home & Crematory on Monday, November 30 and burial will be private. The service will be webcast for friends at https://www.jfh.link/jimculbertson. A Celebration of Life will be planned for the spring. Please sign the digital guest book and leave a condolence message for his family at https://www.jfh.link/culbertsonbook .  In lieu of flowers, please send memorial in Jim’s name to: McHenry Lions Club, P.O. Box 292, McHenry, IL 60051.

To leave a condolence, you can first sign into Facebook or fill out the below form with your name and email. [fbl_login_button redirect="https://justenfh.com/obituary/james-m-jim-culbertson/?modal=light-candle" hide_if_logged="" size="medium" type="login_with" show_face="true"]
×