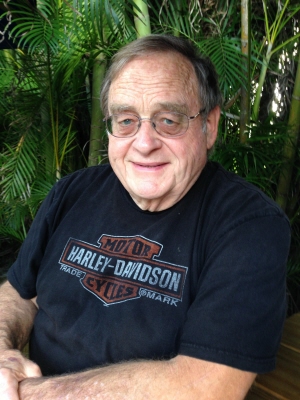 Jim touched many people in different ways with his big heart, outgoing personality, and love for all people. Jim served his country in the Army for 2 years while being stationed in Germany. Jim’s work career involved tool and die and technical repair of robotics and other machines. He owned his own automotive repair business as well. Jim was very passionate about drag racing and built several cars including a Jet Dragster. He had a passion for cars and building. After Jim left racing he focused on his children and was very active in all their sports, activities, Indian Guides Princesses, dance recitals, and many more activities. He was a staple on the sidelines at his children’s events and their biggest supporter. He loved boating which meant the family spent many days and vacations on the water. In his retirement years Jim returned to his passion for cars and restored 4 vehicles including a 1957 Chevy Belair, 1968 Olds 442, 1967 Buick Skylark Convertible, and 1939 Chevy Business Master Deluxe Coupe. He took great pride in his vehicles and spent a lot of time at Kirk’s pole barn. Gloria and Jim spent 20 winters at their homes in Florida. He had many friends in Florida and Illinois where he shared many great times with them at car shows, cruise nights, and outdoor activities. Jim was an active member in the Johnsburg men’s club. Jim was a tremendous husband, father, grandfather, and friend to many people. He will be remembered and his legacy lives through all the people he touched.

He was preceded in death by his parents and his brothers Gerard Studnicka, Tom Studnicka.

Friends and colleagues are invited to celebrate his life with the family on Wednesday, August 4, 2021. A memorial gathering will be from 4 – 7 pm at Justen Funeral home located at 3700 W. Charles J. Miller Road, McHenry, IL. A Funeral Mass will begin at 10:30 A.M. on Thursday August 5, 2021, at St. John the Baptist Catholic Church, 2302 Church St Johnsburg, IL. Luncheon will be following mass in the area. Inurnment will be private with close family at a later date.

In lieu of flowers, the family wishes that you donate in Jim’s name to Johnsburg Mens Club.

Arrangements have been entrusted to Justen Funeral Home & Crematory. For more information please call the Funeral Home at 815-385-2400, or visit www.justenfh.com where friends and loved ones may share memories of James on his tribute wall.

To leave a condolence, you can first sign into Facebook or fill out the below form with your name and email. [fbl_login_button redirect="https://justenfh.com/obituary/james-william-studnicka/?modal=light-candle" hide_if_logged="" size="medium" type="login_with" show_face="true"]
×