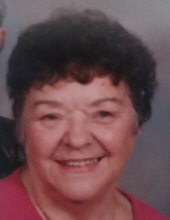 Jane Frances Roewer (nee Danilovich) of Wonder Lake, IL, went peacefully to be with the Lord at Alden Terrace on January 11, 2018. All her children had been by her side until God called her home at the age of 90. She was born October 19, 1927, to Robert and Frances (Rocak) Danilovich.

Jane grew up in Cicero, IL, with her two sisters. After graduating from Morton High School in Cicero, she began working for the V.A. hospital in Heinz, IL. She worked as a medical stenographer in a neuro- psychiatric ward in the tuberculosis dept. Then, her family moved to Crystal Lake, IL, where she met and married Erdman (Bud) Roewer, May 21, 1949. They then moved to Mc Henry and began their life together and started a family.

Jane was a woman of many hats. Besides being a busy mother of five, she took a part time job as a mail carrier for the Post Office. After that, she had several other jobs including: A Stanley Home Products Dealer, an office worker at Sun Electric, and she also worked at the Board of Transportation for school districts 15 and 115.

In her spare time, she was a Cub Scout Den Mother, an Election Judge, a swimmer, a camper, card player, an avid crossword and solitaire buff, a great cook, a gardener, a garage sale gal, a Cubs and Bears fan, an avid reader, and an active member of Zion Lutheran Church until she became housebound, and a true blue animal lover who enjoyed taking her dog for a walk in the woods. She will be dearly missed by all who knew her.

She was preceded in death by her husband, Bud; her siblings, Rose and Sophie; and her parents.

Per the family’s wishes, a memorial and interment will be held privately.

You can visit www.justenfh.com, where friends may leave an on-line condolence message for Jane’s family.

To leave a condolence, you can first sign into Facebook or fill out the below form with your name and email. [fbl_login_button redirect="https://justenfh.com/obituary/jane-frances-roewer/?modal=light-candle" hide_if_logged="" size="medium" type="login_with" show_face="true"]
×