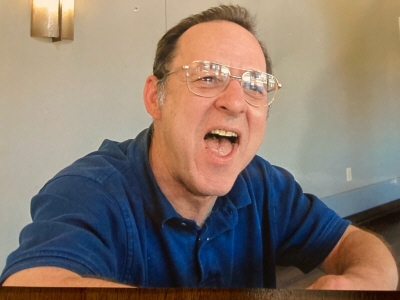 On October 1, 2021, Jeffrey Scott Popovich, having just turned 61, was finally mercifully relieved by the Good Lord from his almost 35-year battle to overcome his devasting brain injury suffered in a motorcycle accident in McHenry back on October 28, 1986.

Jeff was the third child in the Popovich clan, who moved here to McHenry back in 1968. Jeff and his five siblings enjoyed a wonderful idyllic childhood, growing up in a rural area, but one with lots of great neighbors who all became great friends (and all of whom continued to ask us about Jeff for the past 35 years).

Jeff was an extraordinary big brother, especially to his sister Nancy, who was two years younger than him, and his brother Tom who was three and a half years younger than Jeff. Jeff loved good- looking cars and good-looking women, not necessarily in that order. He was a very kind, considerate and unselfish person to everyone, which garnered him many deep friendships over the years. Jeff was a very hard worker, and took great pride in his work, working at Black Dot in Crystal Lake from when he graduated high school all the way up until his accident. He got his sister Nancy a job there as well, which further deepened their awesome relationship as siblings. Jeff also loved music and even loved it more the louder it was. He always had the best sound system in all his cars, and we literally could hear the music blaring from his car when he was still more than a half mile from our house when he was coming home from work. Jeff never had a bad thing to say about anyone, and nobody has ever said a bad word about him. As Jeff always said,” I am a lover, not a fighter”.

For the past 26 years, Jeff was lucky enough to be embraced by all the unbelievably kind and caring individuals at a place called Quality Living, Inc., or QLI, located in Omaha, Nebraska. That facility is primarily for short – term rehabilitation of individuals who are catastrophically brain- damaged. QLI does miraculous work, but it is not a long-term care facility. But yet Jeff remained in that amazing place for over 25 years. Part of the reason was Jeff’s parents spent so much of their time and energy in supporting Jeff there, as well as unbelievable devotion shown to Jeff by our oldest sibling, Marcia, plus the fact that Jeff’s kind and considerate personality was one of the very few things to survive his injury, so that the QLI staff essentially all adopted Jeff and just kept letting him stay there. The Popovich family cannot express their gratitude enough to the many many wonderful people at QLI who have taken such unbelievable care of our brother for these many years, often under extremely difficult circumstances. Every person at QLI earned their angel wings taking care of our brother.

The family is also deeply indebted to Jeff’s brother-in-law, Tom Munn, who went to extraordinary lengths to help us take care of Jeff for 9 years before Jeff went to QLI. For the next 26 years, Tom provided support to his wife, so that she could devote even more of her time and energy to her beloved brother “Jake”.

Jeff is survived by his devoted sister Marcia (and her awesome husband Tom) Munn of Williamsburg, VA, David (Haleema) Popovich of Inverness, Tom (Ginelle) Popovich of McHenry, and Scott Popovich of Elgin. Jeff is also survived by ten nieces and nephews, none of whom had the honor and privilege of ever meeting their awesome uncle before the accident, but all of whom were awed by his courageousness after his accident, and some of whom (Julia, Jilly, and Sophia) loved to go visit him out in Omaha on school breaks.

Jeff is preceded in death by his mom and dad, Bob and Elizabeth Popovich, and his adoring younger sister, Nancy, all three of whom died at least partially due to a broken heart over what happened to an outstanding young man.

Jeff will be buried at Woodland Cemetery in McHenry, right next to his mom and dad.

Please, do not spend money any money on sending flowers. Jeff would have liked it much better if you instead went out and hoisted a drink with your family and friends, and perhaps give a toast to a person whose life was tragically cut way too short. If you toast him with a Mai-Tia at Village Square in McHenry and leave a hefty tip for the bartender, that would be most appropriate.

For information, please call the funeral home at 815-385-2400, or visit www.justenfh.com, where friends and loved ones may share memories of Jeff on his tribute wall.

To leave a condolence, you can first sign into Facebook or fill out the below form with your name and email. [fbl_login_button redirect="https://justenfh.com/obituary/jeffrey-scott-popovich/?modal=light-candle" hide_if_logged="" size="medium" type="login_with" show_face="true"]
×