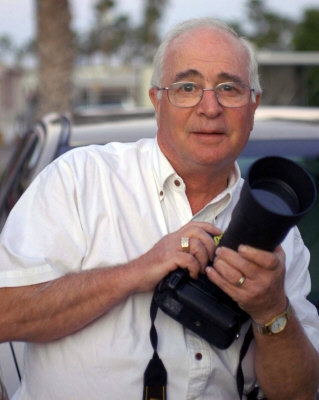 Award winning photojournalist, Jerry “Toma” Tomaselli, passed away peacefully at home on January 29, 2021 after a long battle with Alzheimer’s.

Jerry was born in Chicago on January 18, 1947 to Frank and Louise (Mazzuca) Tomaselli. He began his newspaper career as a copy boy at the Chicago’s American back in 1963.  From there he picked up a camera and never looked back.  Jerry was born with a gifted eye for photography.  Jerry served in the United States Air Force as an MP during the Vietnam War, never telling his mother that he was sent overseas.  While stationed at Hawaii’s Hickam Air Force Base, he met the love of his life Judi Hawkins and they were married in 1969 and moved back to Chicago.

Jerry had a zest for life and tried to include as many people in the festivities as possible.  Many can remember the late-night billiard games downstairs and the family events in their house that anyone and everyone was welcome.  Jerry never forgot his military brethren, often hosting sailors and soldiers around Thanksgiving.  Jerry was very active in St.John the Baptist church and the Knights of Columbus even as past Grand Knight.  Jerry was also an avid fisherman and golfer.  After retiring from the Tribune, Jerry and Judi set out on a new adventure, RVing to Texas and back, where Jerry made many new friends while planning parties and outings for other RV’ers.  “Tomafest” was an annual get together for all the family and friends that Jerry had made throughout his life.  Through it all, Jerry was a great husband, father, and friend and you could often hear the ratpack music, exclaiming to all, that Jerry did it “My Way”.

Jerry was preceded in death by his parents Frank J. Tomaselli and Louise (Mazzuca) Tomaselli.

Due to Covid, funeral services will be private at St. John the Baptist Church in Johnsburg, Illinois with a celebration of life to be determined at a later date.

In lieu of flowers, call someone who is a caregiver to a loved one with Alzheimer’s; visit someone who has Alzheimer’s and let them know you still care.  They may or may not remember you, but their caregiver and family will remember, and what a wonderful meaningful gift that would be!

Arrangements have been entrusted to the Justen Funeral Home & Crematory in McHenry, IL.  For information, please call the funeral home at 815-385-2400 or visit www.justenfh.com, where friends and loved ones may share memories of Jerry on his tribute wall.  Please share any pictures or stories of Jerry at the following email address:  memoriesofjerrytoma@gmail.com

To leave a condolence, you can first sign into Facebook or fill out the below form with your name and email. [fbl_login_button redirect="https://justenfh.com/obituary/jerome-robert-tomaselli/?modal=light-candle" hide_if_logged="" size="medium" type="login_with" show_face="true"]
×