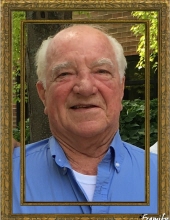 Raised in Chicago, John graduated from New Trier High School, where he excelled in the field of gymnastics and achieved the state all-round championship. In recognition of his talent, John was awarded a gymnastics scholarship to the University of Indiana. After the death of his father, he left college to join the U.S. Marine Corps, where he served from 1961 to 1966 and obtained the rank of Sergeant.

For over 60 years, John enjoyed a career working for Craftwood Lumber Co. in Highland Park. At the time of his retirement, the City of Highland Park proclaimed that each year, Dec. 10 would be commemorated as John G. Streicher Day. In his later years, John was also the former owner of the Main Street Saloon in McHenry.

Memorials may be directed to his family.

For information, please call the funeral home at 815-385-2400, or visit www.justenfh.com, where friends may leave an on-line condolence message.

To leave a condolence, you can first sign into Facebook or fill out the below form with your name and email. [fbl_login_button redirect="https://justenfh.com/obituary/john-george-streicher/?modal=light-candle" hide_if_logged="" size="medium" type="login_with" show_face="true"]
×