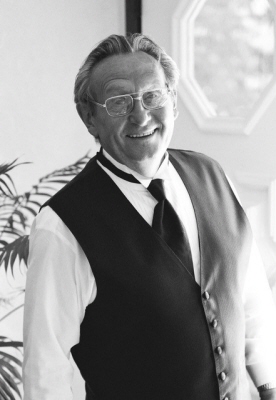 John Wenzler, 85, of Elgin, passed away on December 21, 2020 at his home after many long years of physical and mental decline inflicted on him by dementia. He was born on April 25, 1935, in Kupinovo, Yugoslavia to Jacob and Theresia (Speer) Wenzler. The family immigrated to the U.S. in 1952, living first in Texas and eventually settling in Chicago. He married Katharina Eberle on May 11, 1963 in Chicago. They built a life together in Wonder Lake, later moving to Elgin.

Anyone who knew John or “Hans” as his close friends called him, will remember a couple of things about him. He had his own unique sense of humor—always trying to be the funniest guy in the room. And, he loved his family. He was so proud to be a husband, dad, brother, uncle, great-uncle, and “Opa” to his grandchildren.

John was a veteran of the U.S. Army. He was a long time member of the German-American Club of Antioch and American Aid Society of German Decendants. He loved telling stories from the old days to anyone who would listen. His hobbies included golf and bowling, but his greatest pleasure was playing the accordion. He was also devoted to winning the lottery and would spend hours picking the perfect numbers. Unfortunately, they did not pick him. His humor, kindness, big smile, fun personality and strength will greatly be missed.

He was preceded in death by his parents, Jacob and Theresia (Speer) Wenzler; sisters, Emma Kittl and Katharina Urban; and brother Anton Wenzler.

Due to Covid, a celebration of his life will be planned in 2021. The family would like to thank his caretakers and nurses of Advocate Health at Home and Assisting Hands for their loving care. In lieu of flowers, please consider donating in honor of John to Advocate Charitable Foundation (Advocate Health at Home & Hospice Care).
https://bit.ly/38wBZK2

Arrangements have been entrusted to the Justen Funeral Home & Crematory in McHenry, IL. For information, please call the funeral home at 815-385-2400 or visit www.justenfh.com where friends and loved ones may share memories of John on his tribute wall.

To leave a condolence, you can first sign into Facebook or fill out the below form with your name and email. [fbl_login_button redirect="https://justenfh.com/obituary/john-wenzler/?modal=light-candle" hide_if_logged="" size="medium" type="login_with" show_face="true"]
×