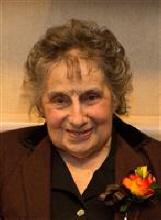 Joyce J. Wilson, age 82, of McCullom Lake, passed away after a brief illness on Thursday, May 8, 2014, at JourneyCare Hospice in Woodstock, with loving family by her side.
She was born January 30, 1932 in Chicago to Orlando R. and Theresa (Vannoni) Ghionzoli.  Raised in Chicago, Joyce was a resident of McCullom Lake for over 60 years.
For the majority of her lifetime, she was a homemaker who found great joy in raising and caring for her family.  She enjoyed teaching her children, and always encouraged their individuality. Quick witted with a great sense of humor, she was an intelligent, politically minded woman who appreciated a good conversation.  Despite significant physical health challenges for many years, she possessed a tremendous fighting spirit with a strong will to live.
Survivors include six children, Dale (Sharon Jusick) Wilson of Mt. Prospect, Kim (Kimberly) Wilson of McHenry, Terri (Gordon Bruhn) Wilson of McHenry, Ami (Patrick Hart) Kalisek of McHenry, Lori (Langley) Gibson of Richland, MI, and Gary Wilson of Island Lake; 10 grandchildren, Sherry (Jeremy) Pabst, Brandy (John) Ramoska, Cameo and Nathan Wilson, Ronald (Chantal Fisher) Morley, Ray (Jessica Marrone) Kalisek, Dane (Erica) Kalisek, Robert, Andrew and Thomas VanderMolen; 5 great-grandchildren; her brother, Orland (Maria) Ghionzoli of Glen Ellyn; and her sister, Gail (Lee) Patel of Racine, WI.
She was preceded in death by her parents; and her husband, Ronald, on April 25, 1984.
Visitation will be from 4 p.m. until 8 p.m. Monday, May 12, 2014, at Justen Funeral Home & Crematory, 3700 W. Charles J. Miller Road, McHenry, IL   60050.
Visitation will resume on Tuesday at the funeral home from 9:30 until 10:30 a.m.  The funeral service will be at 10:30 a.m. Tuesday, May 13, 2014, at the funeral home.  The cremation rite will be accorded privately.
For those wishing to send an expression of condolence, her family suggests memorials to JourneyCare Foundation, 405 Lake Zurich Road, Barrington, IL 60010.
For information, call the funeral home at 815-385-2400, or visit www.justenfh.com, where friends leave an on-line condolence message for her family.

To leave a condolence, you can first sign into Facebook or fill out the below form with your name and email. [fbl_login_button redirect="https://justenfh.com/obituary/joyce-j-wilson/?modal=light-candle" hide_if_logged="" size="medium" type="login_with" show_face="true"]
×