After growing up and marrying in Chicago, she moved to McHenry and raised her family.  Karen was employed by Northern Illinois Medical Center (now Centegra Hospital-McHenry) for over 20 years.  Later, she was a longtime volunteer with the NIMC Auxiliary at the hospital.  Her greatest enjoyment in life was spending time playing cards, games, and laughing with family and friends.  One of her favorite activities was going to the casino to try her luck at the slot machines.  In past years, she loved to dance and bowl, and always had fun playing bingo.

She was preceded in death by her first husband, Harvey Smith, on June 5, 1965; and her second husband, Joseph Maras, on October 5, 1974; two brothers, Donald and Harold; and two sister, Aileen and Bonnie.

For those wishing to send an expression of condolence, her family suggests memorials in Karen’s memory be made to Senior Services, 3519 N. Richmond Road, McHenry, IL   60050. 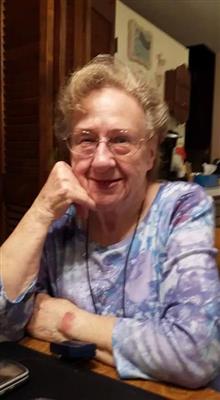 To leave a condolence, you can first sign into Facebook or fill out the below form with your name and email. [fbl_login_button redirect="https://justenfh.com/obituary/karen-barbara-maras/?modal=light-candle" hide_if_logged="" size="medium" type="login_with" show_face="true"]
×