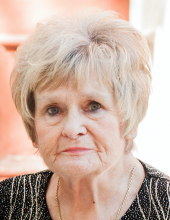 In 1959, Karen married the first love of her life, Robert Doessel, Sr. During their 32 years of marriage, They fulfilled their dreams of owning a small farm in McHenry. There, they raised and showed sheep and Alaskan Malamutes. She later spent many years caring for Bob during a long illness.

After Robert’s passing on September 2, 1991, her son, Bob, introduced her to a good friend, who was also widowed. After just a few dates, she fell in love with her life’s second love, Leonard Fair. The couple married on June 5, 1993 and they lived in his home in Skokie. She was very involved with The Women of the Moose, climbing the ranks to Senior Regent. In 2015 they moved to her home in McHenry.

Together, Karen and Len enjoyed Chicago Cubs & Bear’s games, Northwestern Wildcats’ games, many years of traveling the country in their RV with good friends, and spent winters in Fountain Hills, AZ.

In addition to her parents, Karen was preceded in death by her first husband, Robert Doessel, Sr.; a son in infancy, James; her son, Robert Doessel, Jr.; Leonard’s children, William and Christopher Fair; and her siblings, Vivian Brady, James Huber, Jr., and Jeanne Watkins.

For those wishing to send an expression of condolence, the family suggests memorials in Karen’s name to the Multiple Sclerosis Society at 525 W. Monroe, Suite 1510, Chicago, IL 60661 or to the Muscular Dystrophy Association at P.O. Box 78960, Phoenix, AZ 85062.

For information, please call the funeral home at 815-385-2400 or visit www.justenfh.com where friends may leave a condolence message for Karen’s family.

To leave a condolence, you can first sign into Facebook or fill out the below form with your name and email. [fbl_login_button redirect="https://justenfh.com/obituary/karen-doessel-fair/?modal=light-candle" hide_if_logged="" size="medium" type="login_with" show_face="true"]
×