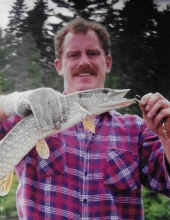 Kenneth Ray Franklin, age 60, of Lakemoor, passed away on August 5, 2018 at his home. He was born on September 27, 1957 to Jerry and Romilda (Lemp) Franklin in Miamisburg, OH. On March 12, 1988, he married the love of his life, Karen Creger, at the First United Methodist Church in McHenry.

Kenneth’s passion, printing, was his everyday career for over 35 years and he had the utmost admiration for this skilled industry. Kenneth’s talent and dedication to the art of printing was admired by his coworkers so much that he became the “Smooth Operator” of the printing process. He loved nature and the outdoors and liked biking, fishing – especially fishing in Canada. A car enthusiast, he was especially taken by both the Cutlass and Camero models. He will be remembered for his sense of humor and his ability to make any situation better simply by saying his signature phrase, “it’ll be aight.”

Left to cherish his memory is his dear wife of 30 years, Karen; his loving children, Kenneth, Justin, and Amber; his grandchildren, Kamron and Karina; his sisters-in-law, Bonnie, Mary, Donna, Rhonda, and Christine “Pooh Bear”; his brother-in-law, Douglas; and his father and mother-in-law, Garnett and Nancy.

Kenneth was preceded in death by his parents.

To leave a condolence, you can first sign into Facebook or fill out the below form with your name and email. [fbl_login_button redirect="https://justenfh.com/obituary/kenneth-ray-franklin/?modal=light-candle" hide_if_logged="" size="medium" type="login_with" show_face="true"]
×