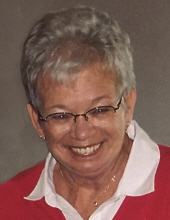 Lora Jean Weber, age 83, of McHenry and formerly of Wonder Lake, passed away peacefully Tuesday, February 20, 2018, with her family by her side at JourneyCare in Woodstock. Born October 28, 1934 in Chicago to Arthur P. and Mildred M. (Baty) Hay, Jean grew up in Wonder Lake, where she attended Harrison School through 8th grade. She attended high school in McHenry and following graduation from McHenry High School, Jean pursued her dream and attended St. Vincent’s Infant and Maternity Hospital School of Pediatric Nursing in Chicago. She completed a 12-month certification course in Pediatric Nursing Clinical Experience and Theory in Nursing Care of Children & Infants, and continued to work at St. Vincent’s until 1956.

Jean met her future husband and the love of her life, John P. “Jack” Weber, while watching fireworks at the Center Beach in Wonder Lake. They married February 6, 1956 at the Cook County Courthouse in Chicago, and a few weeks later on March 19, 1956, were married by Fr. Brett at Holy Name Cathedral in Chicago.

Jean and Jack made their home in Wonder Lake, where they grew their family over the years to include six children. From 1968 until 1998, Jean was employed as a nurse technician at the former McHenry Hospital (now Centegra) in the OB Department, where she thoroughly enjoyed caring for and comforting most of the newborns born there during her 30-year career. Jean also loved to teach the Sibling Classes at the hospital, so much so that after retiring, she continued teaching the classes as well as serving as Lactation Consultant for another two years. After retiring from the hospital, Jean worked in the jewelry department at Kohls. She was also certified as an Advocate for CASA in Sauk County, Wisconsin.

In addition to Jean’s passion for babies and teaching the sibling classes, her biggest enjoyments in life, taking road trips to Florida, camping in Wisconsin, Indiana and throughout the midwest, coloring, playing cards, shopping, and spending time with family. She also enjoyed summers with family and friends at Pioneer Park Resort in Lake Delton, WI.

In addition to her parents, she was preceded in death by her beloved husband, Jack, on December 23, 2014.

For those wishing to send an expression of condolence, her family suggests memorials to either the Wonder Lake Fire Department, P.O. Box 447, Wonder Lake, IL 60097, or to the JourneyCare Foundation, 2050 Claire Court, Glenview, IL 60025. For information, please call the funeral home at 815-385-2400, or visit www.justenfh.com, where friends may leave an on-line condolence message for Jean’s family.

To leave a condolence, you can first sign into Facebook or fill out the below form with your name and email. [fbl_login_button redirect="https://justenfh.com/obituary/l-jean-weber/?modal=light-candle" hide_if_logged="" size="medium" type="login_with" show_face="true"]
×